Mickey's back, and he's on a quest of the magical variety. 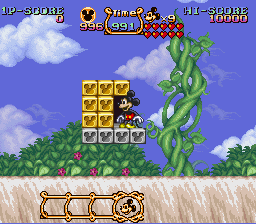 Hold Start + Select on both controllers before collecting a small heart. If done correctly, the Capcom Logo music will play, and the player will get the following items:

Additionally, the timer will be set to 990 seconds. Note that this only works for hearts that come from the small yellow boxes.

When memory address $7E028A is set to $01, a controller input log is created. This was likely used to record the demo gameplay sequences during development. However, no programming has been found that enables this feature in the retail version. In addition, the game is programmed to store the input log to SRAM, which is not present on the retail game PCB. To create a recording-enabled ROM (US version), patch the following 3 bytes in a hex editor:

Once started, it begins to log what button(s) are pressed (if any) of Up, Down, Left, Right, Start, Select, Y, B, and how many frames they're pressed for. As there's no GUI for this recorder, you'll want to use a debugging emulator to monitor the SRAM. Once the 256 byte buffer is full, the game freezes in a loop until Down is pressed, at which point the memory is cleared and a new log started in its place. Set an execute breakpoint on address $01BCC9 and dump SRAM range $700000-7000FF to a file each time it triggers to keep successive logs. See Notes here.

Text for a stage select menu that doesn't appear to be in the game anymore.

Use the Game Genie code DA60-64D9 to display this text when pausing the game.

An older version of the stage bonus text. Apparently, there used to be a time bonus, rather than the flat stage bonus used in the final version.

Use the Game Genie code 4460-64D9 to display this text when pausing the game.

The copyright information appears on the title screen in the Japanese version. "OPTION" was changed to OPTIONS in the international versions.

Same change as above, pretty much.

The odd grammar (XSTAGE) of the Japanese version was corrected (STAGE X) in the international versions.