Mickey Mania: The Timeless Adventures of Mickey Mouse is a platform game where you control Mickey through over 20 levels based on seven Mickey cartoons from 1928-90, while throwing marbles at enemies and stuff. It's fairly watered-down compared to all other versions of the game, lacking "The Band Concert" among other things. One of the weirder quirks of this particular version is the fact that it has loading times, a rarity for a cartridge-based game, partially because of the game's DMA-intensive nature.

Oddly, the SNES version does not use three songs from the Genesis version despite being present in the game's data.

Used while Mickey is trying to avoid fire to reach Pete; the SNES version uses a different song.

The level intro of the Genesis version. Conspicuously, there is no level intro music in the SNES one.

The Game Over theme of the Genesis version; the title fanfare plays instead in the SNES one. 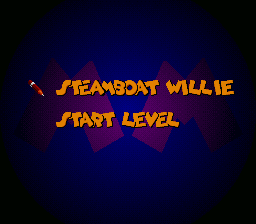 Similar to the Genesis version, go to the sound test and select "Beanstalk1" for music, "Extra Try" for SFX and highlight the "Exit" option holding L for more than 5 seconds. Start the game as normal, and the level select screen will appear.

This game has a fairly difficult to trigger "Level Warp" that appears to be displayed when the game crashes, similarly to Sonic 3D Blast from the same developer. It has you test your luck to select one of two options, "Forward" and "Backward", warping you to the following/preceding sub-stage, or to the beginning of the same stage in the case of selecting "Backwards" when in Steamboat Willie.

You can trigger it in the following places, among others: 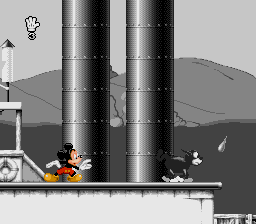 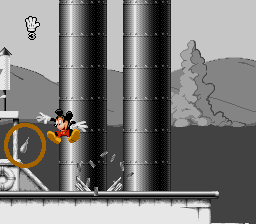 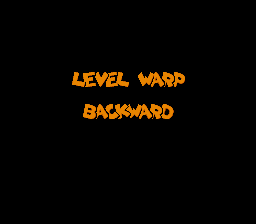 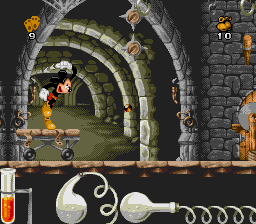 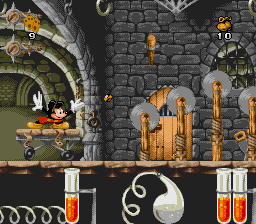 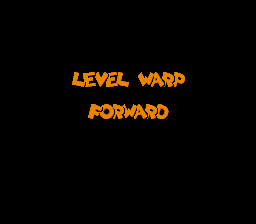