Epic Mickey 2: The Power of Two is the sequel of Epic Mickey released on HD consoles, with the game eventually coming to Windows via Steam... two years after the original versions. It is notable for being the only version of the game without multiplayer support, which basically renders the subtitle completely moot.

The test levels can be seen by changing the config files in the Windows version. When changing "ShowDevLevelLoad" to "true" in ConfigFiles.ini, you are able to choose from every level and can access test levels. Sadly, only the Vita_test and tmp_localizationtestharness test levels works. The other test levels crash while accessing them.

The test level "environments/_test/tmp_localizationtestharness.bin" is the second working test level. The test level itself is a red room, with many graphical glitches. It seems that the test level only contains a little platform, as the player will fall down from the platform while walking further, but will respawn shortly after.

A few unused dialogues are still in the game's files.

Leaving Wasteland and going to the Cartoon World was never in the game, making this line completely unused!

You can not go into the TV in the attic.

You have to start the game new to make a new choice, as going to the Cartoon World is not in the game and is completely unused.

This dialogue never got mentioned by Gus in the attic, where the Wonderful World of Evil show got broadcasted. 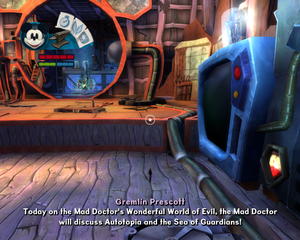 Going to the Mad Doctor's Attic and standing in front of the giant TV, reveals one of the unused lines spoken by Gremlin Prescott. While the text is visible in-game, no spoken line is heard.

As the Vita Test Level is the only working test level in-game so far, these textures were found in the test levels folder in the files. 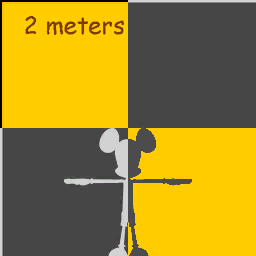 This file indicates the intro when Mickey, Oswald and Gus actually get introduced by Gremlin Jamface for the first time in Mean Street.

LMR states for the Attic, in which Gremlin Jamface later is captured.

Gremlins By Their Colours

All other Gremlins mentioned above, such as "Gremlin Arthur" go completely unused for the game.

The word "two" was removed from this version of the game, most likely to remove the redundancy of using two instances of the number two.