Taking place three years after Castlevania III: Dracula's Curse, Castlevania: Curse of Darkness released on both the PS2 and Xbox has you traversing Valachia as Hector in his quest for revenge. As a Devil Forgemaster, Hector can create Innocent Devils and use them as allies in battle. After completing the Hector campaign, players may go through the adventure as legendary vampire hunter Trevor Belmont.

The item description column to these are all empty. No map item is ever picked up for the Infinite Corridor area. No map items are picked up for the three sections of Dracula's Castle, nor for Tower of Eternity and Tower of Evermore. With the two towers not employing menu maps at all, it seems likely that the three "Real Castle" map items refer to the three maps devoted to Dracula's Castle.

The item description columns are empty, ergo no "old text" to be found. The blue scroll used to represent these items, both the 2D icon and the 3D model, are unused as well.

The previous Castlevania game on PlayStation 2, Castlevania: Lament of Innocence, employed four blue-tinted scrolls of "Ancient Text" numbered one through four. These contained hints for the player and the same may have been planned for the "Old Text" items in Curse of Darkness. The final game includes four examples of old/ancient text inscribed on certain walls which may only be read using the Innocent Devil fairy Tiramisu.

When playing as Trevor Belmont his five sub-weapons are available at all times and can never be dropped. It appears that the sub-weapons were originally intended as field pick-ups, in classic Castlevania gameplay style, as these have unused item ID spots, complete with 2D icons and 3D models. These unused field pick-ups have different designs from what is seen in the final game. The description columns for all five items are empty.

The name for each sub-weapon also constitutes as unused text since they are never shown to the player.

Some items that never appear in any menu list still have 2D icons to represent them.

The full names for both Heart types are never spelled out in the game nor are their 2D icons shown anywhere.

Memorial Tickets teleport the player to a registered save room of their choosing.

The used line for registering a save room, text entry #76 in the table, reads as follows:

There are unused text entries (#1526- #1537 in the text table) that read the game's main areas. They stand out due to being preceded by an ellipsis and a ◎ symbol.

The text entries are placed adjacent to the map menu text about markers, thus it seems likely that these entries were intended for the area map menu.

This content can also be found in the section about unused enemy entries but for easy reference here are all the unused/hidden enemy names.

Heal Zone is presumably the blue pillar of healing light that appears after certain boss battles are finished.

Skull Fish is the creature that Skeleton Diver, the boss of Mortvia Aqueduct, rides on.

Legion Zombie is what its name reveals: The zombie-type enemy that constantly appears during your battle against Legion.

The only unused enemy descriptions are those for Dummy and the one for the encounter with Trevor in Garibaldi Temple.

In the list of auto-generated names for Innocent Devils, the following are never used. These are found in text entries #933 - #942.

Each Innocent Devil type (Fairy/Battle/Bird/Mage/Devil/Pumpkin) has its own set of randomly picked names. The unused names appear at the end of the full name list, after the names for the Mage type. It is unknown what Innocent Devil type(s) the ignored names may have been intended for.

Located in the 0th world are 37 rooms where different terrains and environmental graphics were seemingly tested.

Test Map 0 is a pathway that is longer than even the longest straight path in the normal player-accessible parts of the game.

Test Map 2 includes eight no-collision boxes that change transparency in different ways depending on the player's- and camera's position. 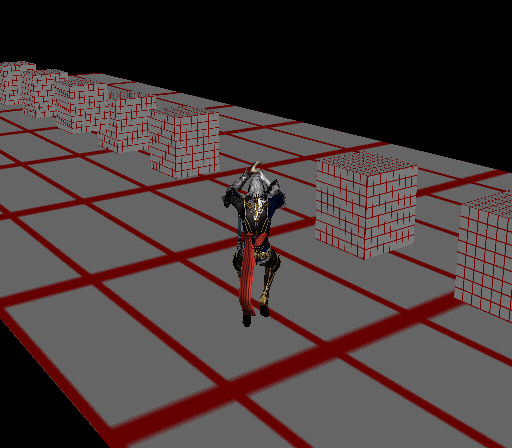 Test Map 8 shows a picture of the main character from the manga Princess Knight (リボンの騎士 Ribon no Kishi, lit. Knight of the Ribbon), along with the text リボンの生地 which can be translated as "Ribbon Fabric". The two last kanji were changed to differentiate from the actual reference, probably as a pun on the texture or "fabric" test that the room was used for. 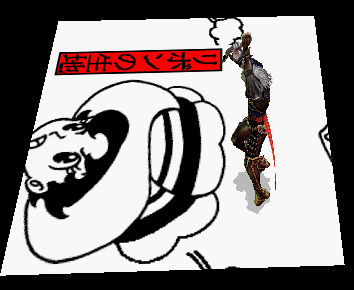 A bar displaying Hearts is reserved for Innocent Devils and for Trevor Belmont. Hector, when alone, doesn't use any Hearts. It exists however as an invisible stat for Hector and it grows as he levels up. Nothing Hector does ever consumes any Hearts. If you lower your Hearts to be less than maximum, it will be restored to max when you enter a Save Room or when you talk to Julia. Performing a Perfect Guard will not restore Hector's Hearts.