A Castlevania game that, shock, isn't about one of the Belmonts! Instead, we get some white-haired emo kid that happens to have the ability to absorb souls.

Several unused graphics can be found inside the game's tiles, such as items, weapons, and a doll that was seemingly meant to have an attack and a hang-glider.

Sprites of Konami Man and his accomplice, Konami Lady. They are former Konami of Japan mascots and have made appearances in several of the company's games.

A single frame of Alucard is included in the bell's graphics.

Here's the closest suitable palette for the single Alucard frame.

There is a different version of the game's save room, possibly an early version that was later improved before the launch date. 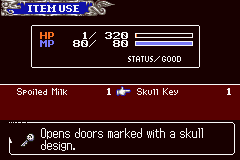 A Skull Key is present in the game, but is unused and has no effect. It's possible that there were going to be locked doors around the castle, as in Harmony of Dissonance, but the idea was scrapped, probably fairly early on. The Visual Boy Advance RAM code 020132AD will add the item to the inventory. Alternatively, using Debug warps from Debug mode menu #4531 listed below will bring this key into consumeable item list. 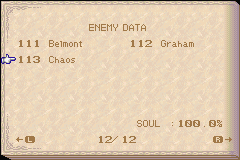 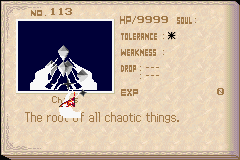 Apparently the final boss, Chaos, has a listing in the game that was taken out before release. The different graphics for the boss in the listing show that it may have been early in development when it was removed. Add this Action Replay V3 cheat to add Chaos to the Enemy List: CF7FE189 33328B68.

While this entry remains unused in the base game, it was later shown in the Castlevania Advance Collection when accessing Aria of Sorrow's Encyclopedia. 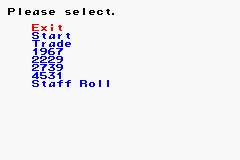 You can access the debug menu with the GameShark code: 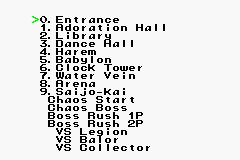 If you select Exit, you get this menu, which lets you start a normal game from various locations. 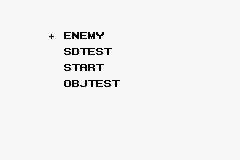 Selecting 1967 brings up a menu, which allows for testing objects and enemies. 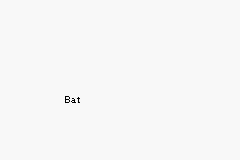 Selecting ENEMY gives you a screen where you can select an enemy using Left and Right on the D-Pad. Then, pressing A or B loads a room from the game with the desired enemy placed inside it; A for one enemy and B for maximum available enemies.

In this mode, player must use Start + A combo in order to access statement menu. Select button doesn't work. 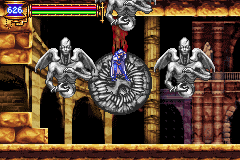 You can select any enemy in the game, even the final boss, which behaves strangely in a wide room. When Soma and enemies are in place, you can push L + R combo to access enemy select menu in order to choose other enemies.

The area used in this mode is composed by a series of isolated rooms, similar to the boss rush arena but much shorter, with a corrupted version of Head Hunter boss room not seen in the actual game. If players get into this area by using warp glitch, the total map rate would be increased.

Selecting SDTEST opens up a sound test menu, but there is only a blank white screen, so it's hard to use. A will play a song/sound effect, B will stop all sounds playing, and the D-Pad will change the selection. 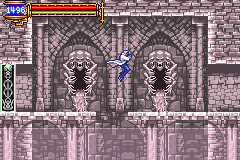 Selecting START immediately spawns you here, at level 99, equipped with the Axe Armor, Black Panther, and Skula souls, armed with the Claihm Solais, and wearing Dracula's Tunic and Satan's Ring. Most likely used for testing the final boss in its proper environment. 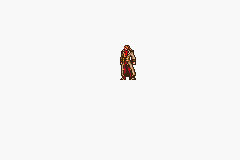 Selecting OBJTEST brings up this sprite of Julius Belmont, which loops through his idle animation. Pressing Down on the D-Pad allows you to watch his next animations. 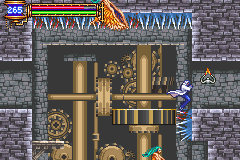 Selecting 2229 immediately spawns you in this room in the Clock Tower, right into a hazard. Pressing Start will just make the game stop, with some objects still moving when pausing (Much like Maxim mode in Castlevania: Harmony of Dissonance). Select button doesn't work. 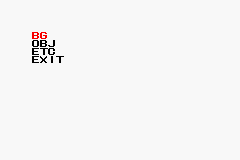 Selecting 2739 brings up another graphics testing menu. The functions that have text "PUSH SELECT + B TO EXIT." written on-screen can be quit by using said command. 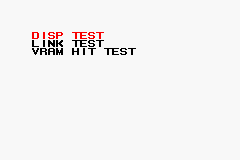 Yet another menu inside a menu. 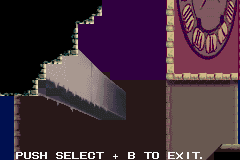 DISP TEST brings up most of the exterior background of the Clock Tower, which can be panned around with the D-Pad. 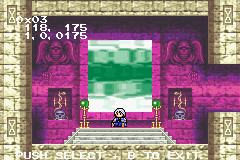 LINK TEST puts you, as a doll version of the protagonist (which is used by a Bullet soul), in a warp room that you cannot exit. You can still move about, and even jump, but not much else. Pressing the Start button will just pause the animation of the doll and his sprite. Select button doesn't work. 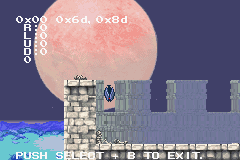 VRAM HIT TEST puts you in the very first room in the game, at the top, as a bat that can somewhat move around freely. However, another copy of the bat lags behind, and the camera struggles to look at both sprites at once. Both Start and Select buttons don't work. Going too far from the start point, or colliding with another object, will crash the game. (Note the crash caused by the VRAM overflow in VRAM HIT TEST would have the possibility to destroy the actual cart or other hardware sometimes.) 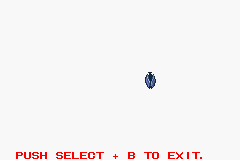 This just shows a graphic of a bat. 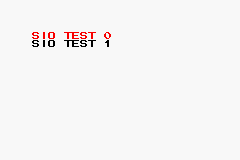 This menu has only two options. 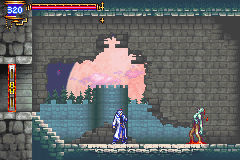 SIO TEST 0 spawns the player here, with a broken HUD. The player can't get out of the room, Start button will just make the game stop and can't access statement menu (aka 2229). Select button doesn't work.

Strangely, pushing SELECT + B combo gives a blank white screen, making it hard to check functions and forcing the player to reset. 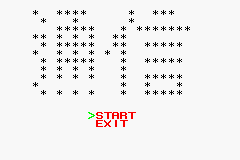 SIO TEST 1, on the other hand, brings up a screen with ASCII art Japanese characters reading "transmission", and a menu for linking two games together via a GBA Link Cable. 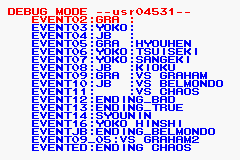 This menu gives you the ROM revision and a list of places to warp to. You'll start at level 45, with all weapons, equipments and consumables upon warping, and automatically obtain all souls... Or so you'd thought it might be.

For some reason, the "all souls obtained" debug flag did not apply to Japanese version correctly, so you only warp in the destined position with the equipped souls preset in such version - Lightning Doll and Black Panther.