This page details one or more prototype versions of Super Castlevania IV.

A prototype of Super Castlevania IV with a last file modification date of June 14th, 1991 was leaked along with several other prototypes and source code in July 2020, it can be found in NEWSテープリストア\NEWS_05\NEWS_05.tar.\home\kimura\games.lzh. It's further along than the build shown in this advertisement, but there are still many differences compared to the final release. These differences include enemies which use older sprite art and behaviors, a different in-between stage map graphic, prototype versions of many of the songs from the game, as well as differences in the placements of subweapons and items.

The option screen gets a overhaul, and added a basic Sound Test function for the final version. A new animated fire icon replaced the heart icon - which is already used in the title screen - as the cursor for the option menu.

The password screen is yet to be finalized, and the final version is given a slightly brighter shade rendition. The name entry screen is not accessible in the prototype build, thus the name tag at the bottom of the password screen is always "KONAMI". The password system is not compatible with the one used in the final game, and may generate password sets even the game itself won't accept if entering one of the inaccessible stages mentioned below and trigger a Game Over.

To continue to Block 6 from Block 5, change D0 to 80 at offset 0x129AB. Otherwise, the game will reset after completing Block 5. Alternatively, you can skip directly to Block 6 by entering the following password: 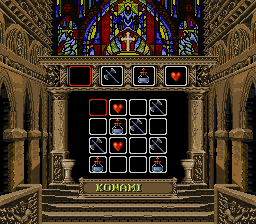 You can play through part of the game this way, though the stages will lack enemies (besides bosses) and candles starting from Blocks 6-3 and 7-2 respectively. Additionally, every stage from Block 7-1 onward consists of temporary graphics (mostly simple blocks and stairs on a black background). The game will crash after defeating the boss of Block 9; however, the data for Blocks A and B are still in the game, as are all of the bosses besides Dracula.

Using the Pro Action Replay (PAR) code 7E008637 leads to a peculiar room in Block A-1: The Clock Tower. This room is massive, but consists only of a long, straight platform, a massive staircase, and a bunch of empty space and garbage data. It also reuses tiles from Block 1-2. Most obvious of all, however, is the column scroll effects in play here, which give the illusion of a massive, round, tower-like room.

It's unknown what this room was intended to be, as the room and its value were completely erased in the final game, but from appearances, it might have been similar to Block 5-0A: The Tower of Terror from the previous game. It could also be the bridging phrase between Block 9 and Block A as Room #38 being the room used as the starting point of Block A in the final game, and what appears to be the upper exit of a massive staircase roughly matches the entrance of Room #38 in position and shape. 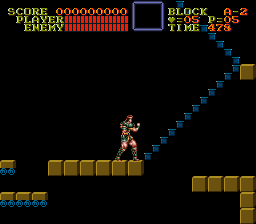 As mentioned above, Block 7-1 onward uses temporary graphics for its terrain:

The ROM header claims itself as "SUPER CASTLEVANIA" although the title screen and system font are using their Japanese counterparts in the prototype.