The direct sequel to Aria of Sorrow doesn’t even try to conceal the fact you are essentially playing as (a potential) Dracula. It improves upon its predecessor, even making the support cast playable in an alternate bad ending.

Since the menu is disabled in Julius Mode, a lot of content that would show in menus would not show in normal gameplay. Using Action Replay codes to equip Julius Mode-exclusive items and abilities on Soma, or using the infamous Succubus Glitch to get as Soma to areas normally exclusive to Julius Mode characters, you can uncover some otherwise unused descriptions. 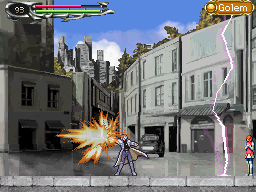 All of Julius, Yoko, and Alucard's special moves from Julius Mode are actually coded as bullet type souls. They can be equipped on Soma via messing with Action Replay codes or using the Succubus glitch. Aside from playing Julius and Yoko voice clips, they and they work exactly as intended. Pictured above is Yoko's Holy Flame spell. 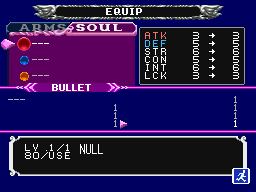 These souls cannot be used in Enemy Set mode as they don't show up in the menu.

The following Action Replay DS codes can be used to add these Souls into Soma's inventory in the US version of the game: 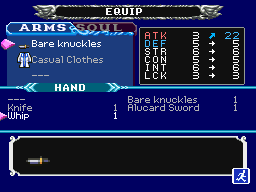 It's possible for Soma to equip the Alucard Sword via hacking or a glitch, and it works exactly as intended complete with an A button special attack, but cannot be swung at an angle by Soma. It has an otherwise unused description saying: "Alucard's favourite sword." It is equipped by default to Alucard during Julius mode.

There is also an unused "Bare knuckles" weapon with a description simply reading "Bare fists." This weapon is...well, Soma without any weapons, punching things. Pretty redundant as you can unequip him of his stuff with the -- option. It has no icon, defaulting to the one used for Knife. Curiously, if this item is in the player's inventory at the start of a brand new game, it gets equipped instead of the Knife.

One can also glitch Julius' Vampire Killer whip into Soma's game. It works correctly but its menu icon is also the Knife, it has no description in non-Japanese regions, and it cannot be dangled by Soma.

These weapons can be added to Soma's inventory with the following Action Replay DS codes (US version only): 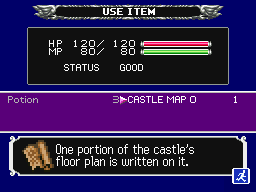 There is an unused item called "Cᴀsᴛʟᴇ Mᴀᴘ 0". It is probably a leftover debug item since:

To add this item to Soma's inventory, use the following Action Replay DS code (US version only):

In the Japanese version of the game, the Julius mode weapons have actual descriptions, of sorts: 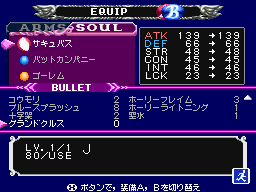 Julius' subweapons simply have "J" in their text box. 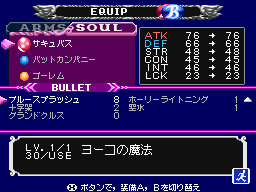 These names were made official as of Castlevania: Harmony of Despair, 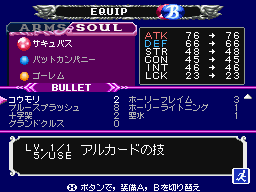 and Alucard's bat transformation gets "アルカードの技", translating as: "Alucard's ability". 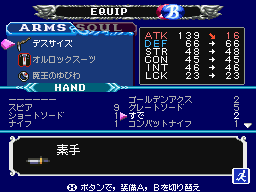 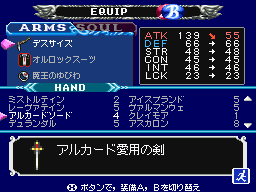 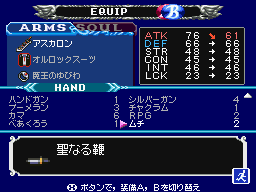 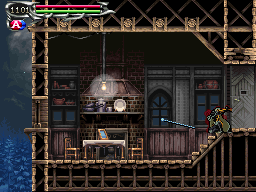 And yes, there's more to the Vampire Killer than just the above.

When the Vampire Killer is equipped onto the glitched Alucard in the main game or if it's hacked into his possession in Julius mode, the player can perform an odd diagonal swing similar to the Alucard Sword's diagonal slash (It's not known exactly why, but it's likely it was an unused whip move. In most cases, as it is separate from the regular whip sprites it was probably either part of a whip retract move after Julius' normal attack animation or an undeveloped Super Castlevania IV-style diagonal attack.)

By using Action Replay or the Succubus Glitch, one can gain more than the maximum of 9 souls for each Monster Soul. As it turns out, doing so reveals that some souls also have unused level-ups. Numbers of souls collected are stored in 4 bits of RAM, which limits their value to 15, even in a glitched state.

Note: Only Souls that do something apparently different are listed here. 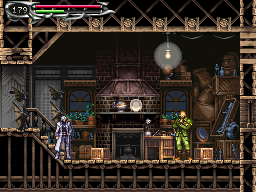 Formation of four bats out of three. All four bats can attack. 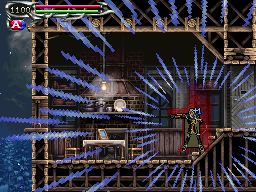 Alucard has his punching animation from Symphony of the Night available should the player hack a fist-based weapon onto him, then perform the special attack of such weapon. (The game loads Alucard's sword animation for regular attacks of most fist-based weapon.)

A text dump has unused text for a part where Hammer would be playable during Julius Mode. The poor guy doesn't join the fun in the final version.

A conversation between Hammer and Soma. It would be possible that at one point of development, Hammer also had his own dialogue with Evil Soma, but was eventually scrapped.

A conversation where Yoko talks to Soma about Julius's hinting at an unused piano puzzle. The piano is only mere scenery in the final game, though the idea for a piano-based puzzle was later revisited in Harmony of Despair.

Evil Soma will speak a line before fighting with Julius team, where the word after "come on" (voice clip #097 in sound mode) varies according to the player character. He calls Julius "Julius Belmont" (voice clip #098), Yoko "Fernandes" (voice clip #099), and Alucard "Alucard" (voice clip #100) accordingly. However, voice clip #101 would result in "Come on, human!" instead. This may have been used in the otherwise scrapped playable Hammer, being a common human.

This combination of voice clips can also be heard if normal Soma is glitched into the Evil Soma fight.

The enemy list entries for the Julius-exclusive Evil Soma (No.117: Soma "The Dark Lord") and his second form ("Dracula") were blanked out in the final version's enemy list, but can be triggered by hacking or glitching Soma into the Julius mode final fight.

They have descriptions in the Japanese version: 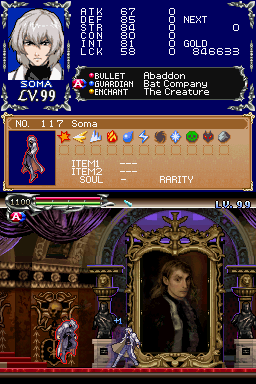 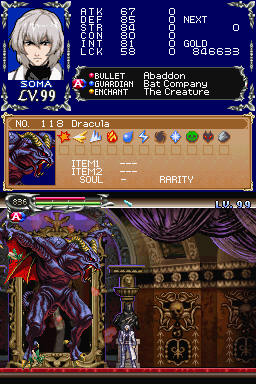 The final version of the game only uses unexplored (castle) maps for three areas of the game: The Lost Village, Wizardry Lab and Garden of Madness. You automatically start with the first one, and you can purchase the other two.

There is data in the game for all areas having unexplored maps. Most of them tend to be far more complete than the three you have access to; mostly the hidden rooms are not shown. 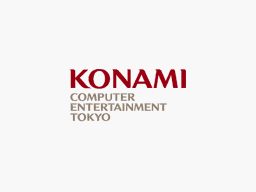 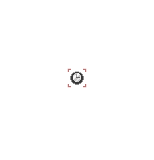 An icon for a stopwatch sub-weapon is stored along with the rest of the Julius mode sub-weapon icons, but was not used in the final version. The reason why it got scrapped is unknown; probably because:

- Soma's time stop ability (Zephyr's soul) has a more "devil-ish" theme which is not suitable for re-using it as sub-weapons.

- The skill activation voice of Zephyr's soul defaults to Soma's voice in the Japanese version.

A golden version of the clock hands that appear in Zephyr's boss room. Possibly ment for the stopwatch sub-weapon above. No hitbox properties exist.

Soma never gives the player a view of his back when standing still in the final game.

A (presumably) Werewolf soul variant that was abandoned fairly early in development progress.

Malphas never meets the player upside-down in the game, nor in Symphony of the Night.

Malphas never transforms into raven form, nor in Symphony of the Night.

Road Blocker variant inside a room. Used in demo versions as road blockers that prevent player's action toward buggy/unimplemented area.

Unused "frozen" sprites for Soma. Stored with his Petrification sprites. Uses an unused palette, and has no valid animations or data beyond the sprites.

Alucard's stone animation #1 from Symphony of the Night. In Julius Mode Alucard can't be turned into stone nor affected by bad status. The original graphics are intact but the palette can't be loaded properly.

Among the Fleaman graphics is an animation of the Flea Rider enemy from Rondo of Blood and Symphony of the Night. This holds true in both Portrait of Ruin and Order of Ecclesia.

Imp's graphic assets contains the balloon enemy from Symphony of the Night. Balloon itself didn't make an appearance until Order of Ecclesia.

Slogra's vertical stab from the air, leftover from Super Castlevania IV and Symphony of the Night. He did team up with Gaibon in the DS games but they never perform combination attacks, nor had an appearance as a boss.

Gaibon's old shooting pose on the ground, only used as a boss-mode-only attack.

Gaibon's old pose when he's defeated on the ground.

Evil Soma's second form has graphic data of Dracula's fatal rain attack (during his second form, from Symphony of the Night prologue battle), with hitbox intact.

Unused/Symphony of the Night Palette