The second game in the action-adventure Origins series, that adapted most of the original young Goku saga.

Many of the insert songs from the Japanese version, like the title screen music, were changed, unlike in the first game. This may be due to copyright issues. 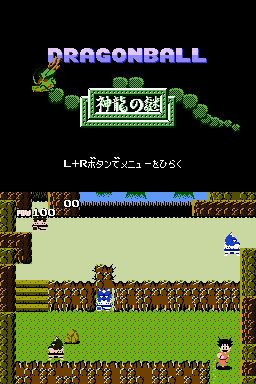 The Japanese version includes an emulated version of the Famicom game Dragon Ball: Shenron no Nazo, the second licensed Dragon Ball game (After Dragonball: Dragon Dai Hikyou for the Super Casette Vision) that took a similar direction as the Origins series.

This option was completely removed from all other versions, which is especially odd, considering the game was released overseas as Dragon Power, and in France as Dragon Ball: Le Secret du Dragon.

If the game detects it is being played on a flash card or emulator, it won´t let you start a save or play the survival tower mode.