Dragon Ball Z III: Ressen Jinzou Ningen, or "Battle with the Androids", is the fifth card-based Famicom RPG based on the franchise and the last one that adapts the manga's storyline. It starts where the previous game left off, with Super Saiyan Goku fighting off Freeza in Namek, and then briefly adapts the fifth DBZ movie (the one with Freeza's brother) in the middle, before the titular Androids eventually show up. However, the game ends in a cliffhanger just before Cell achieves his perfect form.

Using the Game Genie code AOSNEYAA will start the game in an unfinished Tournament Mode. It is in a very unfinished state, with graphical glitches, menu glitches, unimplemented options and often crashing the game. 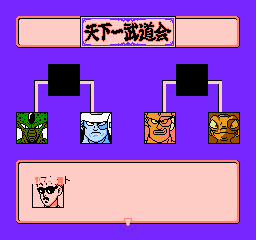 A whole set of overworld sprites for Trunks. Normally, Trunks is only seen in cutscenes and joins the party late into the game.

Overworld sprites for Android 16 and 18. Like Trunks, they only appear in cutscenes and battles in-game.