Dragon Ball Z: Taiketsu is a one on one fighting game that is commonly considered by many to be one of the worst Dragon Ball Z games ever. Its one saving grace was being the first DBZ game released overseas to feature Broly. 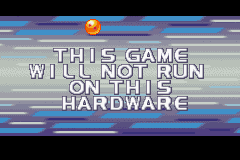 Taiketsu has a similar anti-piracy measure to the Legacy of Goku series if it does not detect the correct save type or hardware. If it doesn't, the game will lock up on this screen the very moment you hit Start. As a slightly spiffier point, the Dragon Ball on said screen is animated in that it bounces around the screen.