From The Cutting Room Floor
Jump to navigation Jump to search
This page contains changes which are not marked for translation.
Other languages:
Deutsch • ‎English • ‎español • ‎français • ‎português do Brasil • ‎한국어

Dragon Ball Z: Harukanaru Densetsu is a card game that can influence your strategy and your luck. It covers the events of Dragon Ball Z from the Saiyans' arrival to the Cell tournament.

In sound/sdat/sound_data.sdat, there exists an alternate version of the opening theme whose internal name is BGM00, while the version used by the game is BGM23. The two versions are practically identical; but the version used has a loop and the unused version does not have it. There's also a small change used to mark the end. It should be noted that both versions use the same .SWAR and .SBNK files (BANK_BGM00 and WAVE_BGM00, respectively).

The cards in the Japanese version use kanji rather than symbols. There are also some stats printed on the cards that were removed from international releases.

Furthermore, in the Japanese version, when beginning a fight, the names of the characters appear. They do not in the other versions. 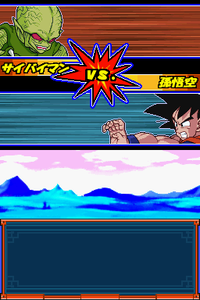