Press Up + X + Down + B + Left + L + Right + R twice during the intro (sound effects will play after the first and second successful entries) to unlock extra characters in Tournament Mode.

However, the developers also included an easy way to bypass the button code. ROM address 0x00FFA1 (offset 0x007FA1 in an unheadered ROM) can be set to 01 to require only one entry of the code, or 02 to bypass the code entirely and automatically unlock the extra characters.

When selecting characters, the first CPU player's name will initially read "Player 9"; after playing at least one match, it will change to display the number of wins and losses. 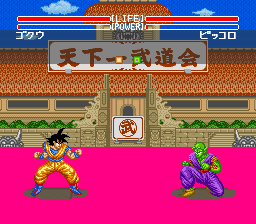 Setting ROM address 0x00FFA4 (offset 0x007FA4) to 00 will enable a CPU usage meter which turns Layer 1 on and off to indicate the amount of CPU time currently in use. The more background is visible, the more CPU time is being used.

ROM address 0x00FFA0 (offset 0x007FA0) controls which mode the game first enters when starting up. The default value, 04, corresponds to the intro; changing it to 00 will allow you to enter the debug mode when starting the game.

Use the D-Pad or A when "debug mode 1" is highlighted to cycle through debug modes 1 and 2, as well as the game's regular options menus. 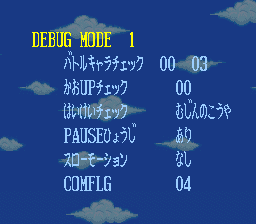 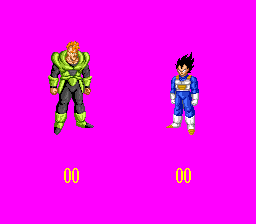 This screen displays all of the frames associated with two selected characters. Use both D-Pads to cycle through the available frames, and press Start to return to the menu. 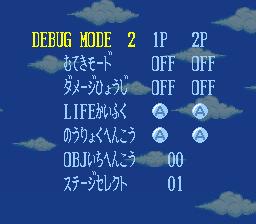 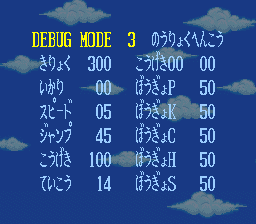 Used to adjust various values associated with either Player 1 or 2, depending on which controller is used to access it. 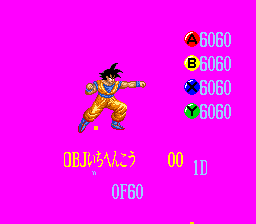 This is another screen used to view player graphics. Use A / B to cycle through available frames. The flashing yellow dot under the character sprite represents the bottom center of the character's hitbox.