Select "End" from the main menu while holding down Ctrl+Grph (mapped to Ctrl+Alt in Neko Project 2 and DOSBox-X) to display a credits message from the programmers.

Type "MUSIC TEST" at the DOS prompt ("TEST" must be in all caps) to access a music and sound test. Pressing Esc exits. 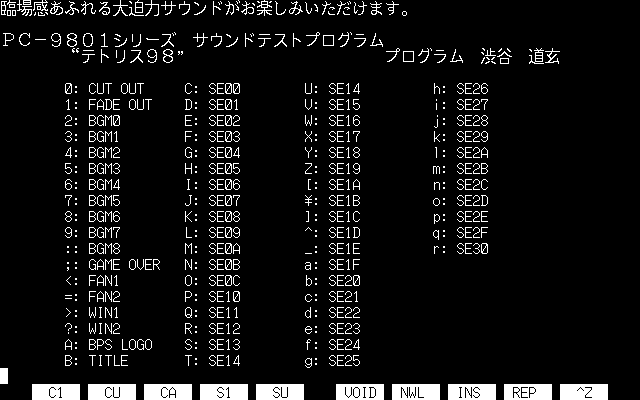 The short jingle that plays before the title screen music in the original Super Famicom version is unused in this version. It's listed as "TITLE" in the sound test.

In this version, clearing Bombliss Contest mode just loops back to the first stage at a higher speed, instead of showing a staff roll. The "all clear" fanfare and the staff roll music (listed as "FAN2" and "BGM8" in the sound test) are both unused as a result.

RGB.DB contains all of the game's graphics, and a handful of them are unused. (See the notes page for info on extracting the images.)

MENU.RGB contains an alternate version of the title screen/main menu, with just the title "Tetris + Bombliss" and no "Options" item on the menu.

MENU1.RGB, MENU2.RGB, and MENU3.RGB contain the three different menu states for this version of the title screen.

OPEN.RGB contains the BPS logo shown when starting up the game. While this file is technically not unused, it contains a background which is not actually seen in-game.

LEVEL.RGB contains a widget for displaying the current level, which probably would have been located in the empty space between the "score" and "lines"/"remains" counters. Instead, the current level is shown at the top of the frame surrounding the playfield.