There is no knowledge that is not power. Man, we must be powerful as hell by now. 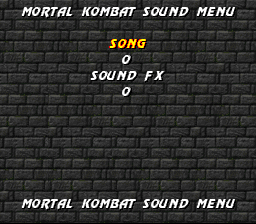 Sheeva was removed from the SNES version of UMK3 in order to fit the rest of the game onto the cartridge, but apparently she wasn't entirely deleted.

On the title screen, hold L + R and press Start to enter the 8 vs. 8 Tournament mode. Press Up + Start to randomly select characters. Sometimes in this mode, you'll see the random select seemingly select the "E" icon instead of a character. That's what's left of Sheeva! Here's a YouTube video exploring what still works and what violently crashes. Of note is that, should Sheeva be finished by a Babality, her baby sprite will appear. Several body part sprites as well as her inflated head sprite also exist in the ROM.

Chameleon was planned for UMK3, but because this was a rushed port, he remains unfinished and hidden. To access him, use Pro Action Replay (PAR) codes 7E36D019 7E52C819.

He has Rain's lifebar name, but Scorpion's look and combos. He has no special moves or Fatalities.

There are four stages which are in various states of completeness. Use Pro Action Replay (PAR) code 7E3A7E??, where "??" is one of the below. 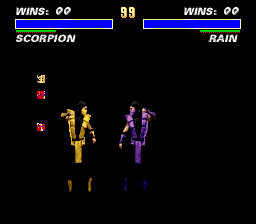 (ID: 07)
What's left of the Bell Tower. The screen scrolls just fine, but aside from a few pieces of garbage sprites, there's nothing at all in the level. No Pit Fatalities can be done on this stage, either. The music is the Soul Chamber's theme from MK3, which also plays in The Pit III for the Shao Kahn fight. 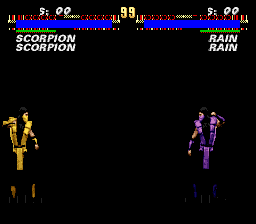 (ID: 08)
A very glitchy level that screws heavily with the life bars and such. Aside from that, there's no background graphics here either. This was the Kombat Temple in MK3, but in this version the music has been altered to the BGM played on The Rooftop stage of said game. 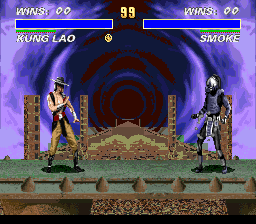 (ID: 0A)
A half-there version of the Portal Stage, where you would fight Smoke with the proper Kombat Kode in MK3. Since it's just the Pit III bridge with the Game Over screen backdrop, the game composes it that way, the same way as in MK3. However, in calling up the background from the UMK3 game over, there's some palette glitching that occurs.

Scott's Slots, one of the secret mini-games from MK3, was removed from this game, but can be played by using the Game Genie code D629-3F62 while in the Kooler Stuff menu. The game still works, but the slot graphics (taken from character selection portraits) and supporting text will appear broken, although the description text still works as it was an in-game string:

This game is apparently an overworked MK3 cartridge with additional characters, so it contains most of the unused text from said game.

Options for "Slow" and "Fast" exist in the options menu text, but there is no option in any menu that is associated with these words.

No idea what this means.

These strings appear in the list of Kombat Kodes.

Remnants of a sound driver?

Remnants of some source code. 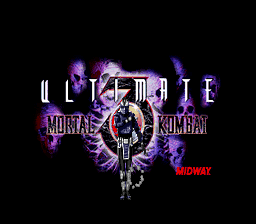 The code to play as Smoke from the SNES MK3 still works (Shao Kahn will say "Outstanding" and cyborg Smoke appears on-screen), but since cyborg Smoke is already playable in this game, this doesn't seem to actually do anything.