Pro Action Replay (PAR) code 8084CBA9 8084CC07 allows you to access a buggy duplicate version of the Courtyard arena after one fight (as it follows the pattern of the Game Genie codes where you always fight in a particular stage after the first fight).

The game calls it "Throne Room" on the Vs. screen and plays Goro's theme on the stage as its BGM. It plays fine for a normal fight, but trying to perform a Fatality on this stage slows the game down immensely, then freezes for some bizarre reason.

It is also worth noting that this stage plays an otherwise-unused "pinch" variant of Goro's theme when the player is being told to "Finish Him/Her!". 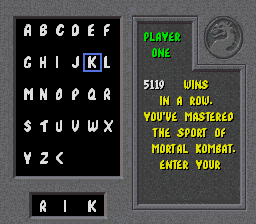 The programming to display the initials entry screen is located at SNES address $98D361. A code block exists at $80836A-8083BF that can reach it. For some reason, this block is located during the Reptile battle intro (right after the "You have found me now prove yourself !!" text is displayed), and will execute if the 16-bit value at $7E0072 is <$8000. The $7E0072 address is set to $FFFF multiple times during the game, possibly as a way to disable the initials screen?

After entering the initials, the game is programmed to simply continue on to the Reptile battle.

Some leftover build text, most likely related to the sound driver, starts at 0x0093C5 in the ROM.

Pro Action Replay (PAR) code 80D16AD1 enables an alternate super uppercut Fatality for Johnny Cage. To perform it, press back while close to your opponent. This seems to be in line with his censored fatality in the Genesis version, but was cut in favor of putting his foot through the opponent's chest.

According to Nintendo, there are three revisions of the game in total.

European Revision 1 has a couple of reset bugs not present in any other revision: