Castlevania is a whip-crackin' good NES game by Konami. Kill Dracula before he terrifies the world with his atrocious fashion sense!

Though unused in the NES version, these sprites appeared in the MSX2 sister game Vampire Killer as usable items. There are three crosses and two Bibles: Blue crosses work as a long-range boomerang, gold ones clear all enemies on the screen like the rosary item in the FDS/NES version, and silver ones stop enemies from spawning in from the sides of the screen for a short time. White Bibles decrease the number of hearts merchants charge for items, while black ones increase the number.

Along with the standard crown, chest, and Konami™ brand moai head, some rather unusual bonus item graphics can be found in level 2's sprites. Is that a basket of...puppies?

A short tune that plays on the file select screen in the Japanese Famicom Disk System version of the game (documented below). As this feature was removed from the cartridge versions, the track goes unused. The official OST, Akumajo Dracula Famicom Best (KICA-1005; reprint KICA-7901), has it titled "Underground", and it was reused for similar purposes in Castlevania: Harmony of Dissonance and Akumajou Dracula THE ARCADE. It also appeared in the Amiga port.

The game was released in three different formats: the original Famicom Disk System version, a Nintendo Entertainment System cartridge version, and a Famicom cartridge version, which was based on the Revision 1 revision of the NTSC NES version. Each one has its share of unique features and differences.

The title screen was completely redone for Castlevania, although both have a filmstrip motif. Akumajou Dracula's title scrolls in from the left, as opposed to Castlevania's which simply appears. An animated bat was added to Castlevania's title, which flies out of the castle and flaps menacingly at the player until they push the start key or the opening demo starts. Speaking of which, there is no opening demo in Akumajou Dracula—the title screen simply disappears after a short time and scrolls in again.

The Famicom cartridge version enhances the logo slightly with some gray shading and offers an option to switch to easy mode (more on that below). Since the easy mode option and updated copyright text take more space, the title logo has been pushed up and the Konami logo has been removed. The title screen now fades in, instead of scrolling in like the FDS version, and the opening demo from Castlevania is present.

This Konami logo screen is shown before the title screen in the Famicom version, replacing the logo that was removed from the latter. 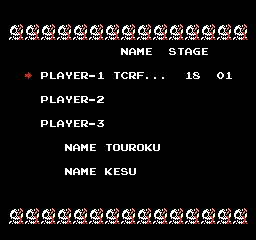 Unlike Castlevania and the cartridge version of Akumajou Dracula, where Dracula's castle has to be cleared in one go, the FDS version allows players to save their progress. Up to three players can be saved, which are managed on a very Zelda-esque screen. The current stage is tracked, along with the number of game overs. As mentioned above, the unused music track in the NES version is played on this screen.

In the FDS version your file name is displayed in the cast credits, which makes you the one starring the role of Simon (a nice little detail with the whole movie theme of the game). As the save feature was removed for the cartridge versions this cast credit was adjusted. 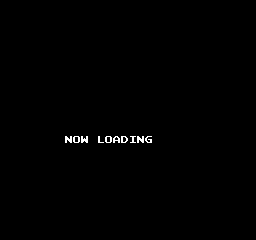 Of course, being on a disk comes with disadvantages. The game has to load twice between each level, displaying the castle map in between loads.

As mentioned above, the cartridge version of Akumajou Dracula features an easy mode, which can be selected on the title screen.