Ys III: Wanderers From Ys is the third game in the legendary Ys series and is known for being the only one that was sidescrolling instead of having an overhead view. 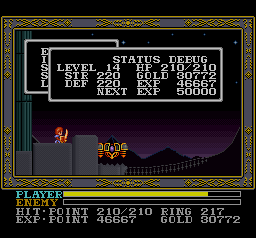 Turn the game on and wait for the Sammy logo to fade completely in. Quickly press Up, Down, Up, Down, Select, Start on Controller 2. Start a new game or select any file. Press Select on Controller 1 to bring up the sub-menu and choose "Status". Then press Select on Controller 2 and the word "DEBUG" will appear next to "STATUS". This puts the game into Debug Mode. Every time Adol's life meter is depleted, it will automatically refill, thus making him invincible. All areas on the overworld map will also be unlocked.

In addition to this, pressing Left and Right on Controller 2 will freeze the action and cause Adol to slide left and right. If an enemy was on-screen at the time, the enemy will slide along with him. However, no new enemies will show up until Adol's movement is stopped. Stopping will make any preset enemies for that area appear, but any enemies that had been moved with Adol will vanish. Adol will also slide through some walls, but can potentially become stuck in them. If Adol stops on a staircase, he can slide left or right in mid-air. If he is stopped again in mid-air, he will walk up or down as though he is on stairs when moved again with Controller 1.

It is also possible to instantly kill the final boss without even damaging it first by pressing Left and Right on Controller 2 during the fight. Unfortunately, the exact method to cause this to happen is unknown at this point. It's also unknown if this works on other bosses or not. 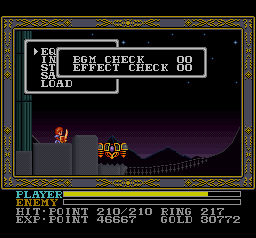 In the Japanese version of Ys III, there is a rather detailed crucifix, complete with Jesus nailed to it, inside Ballacetine / Valestein Castle. The puzzling thing is that the game is home to a number of other gods already, making one wonder whether real world religions actually do play a part in the game's world at all. Naturally, this imagery was completely cut out by the censors.

Inside the ROM is a build date that can be found at 0xBB720 in the JP version or at 0xBB72B in the US version.

N. Fujisawa is Noboru Fujisawa, one of the main programmers at ACC, the game's developer.

Shortly after the release of the game, a bug fix was released to address a sound buffering issue. The sound would occasionally stop completely in the market after saving data. Not even turning the power off and on quickly would work.