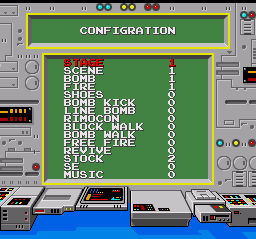 Beat the game, and at the end screen, wait for the music to fade out, then hold I and press Run. A sound effect will confirm correct entry. Now reset the game (hold Run and press Select) and start the Normal Game. The above screen, consisting of a level select, sound test, lives toggle, and powerup toggle, will appear following the opening cutscenes.

This only appears to work in the Japanese version, despite the sound effect playing and the text being present in the US version.

"Tap is not connected" Error Screen 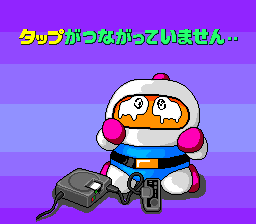 This requires a PC Engine Senyou Multi Tap. Select "Battle Game" on the title screen with Pad 1 while holding Up+I+II+Select+Run on Pad 5. This only works in the Japanese version.

This screen was intended to display if a Multi Tap is not connected to the system when attempting to enter the Battle Game, as such a screen was used in Bomberman. However, as this game allows a solo player to play the Battle Game against AI-controlled opponents, it would be redundant to display such an error screen in this game, thus the screen does not appear under normal circumstances and was disabled entirely in the North American version. If forced to appear using the code above, the Battle Game setup screen will appear shortly anyway.

On the title screen, a (rather cheap) trademark symbol was added next to '93. "Vs Game" was changed to "Com-Link", removing the unique graphic, and the copyright date was updated to account for the later release.

The text box is 8 pixels wider in the US version, to account for the greater space needed for the English text.

Bomberman's onigiri (rice ball) was replaced with a bagel in the level 3 eyecatch.

In the Japanese version of the level 4 eyecatch, Bomberman holds some sticks of imitation crab meat (helpfully labeled) in one hand, and a mug of beer in the other. In the US version, the crab sticks and beer were both removed; instead, Bomberman flashes the double-V sign. He's not a crook, folks.