A CPU usage meter can be toggled when the Pro Action Replay (PAR) code C100BF01 is active.

The Pro Action Replay (PAR) code C13D2801 will allow Bomberman to jump in the Normal Game.

A 1-Player debugging function can be accessed through the following Pro Action Replay (PAR) code: C022F301.

In a 1-player game, pressing the R button will give the following power-ups:

Use Pro Action Replay (PAR) code C0FCAF01 to enable a soft reset function. When the game is paused, hold Select and then press Start to restart the game.

Two battle stages are hidden in the game. Both of these stages use the 3rd battle theme, a track that can only be heard through normal play in Battle Stage 4.

The "official" method of accessing these stages is to plug in a Hudson Super Joycard controller, turn on the turbo-fire feature, and hold X for several seconds. Using the codes listed below is a highly recommended alternative. 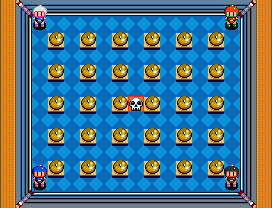 Use Pro Action Replay (PAR) code 7E1CCD:0A to access this stage, which seems to take place in a boxing ring.

In this stage, all players are fully powered-up at the start. There are no walls, and the only power-up is the skull in the center. 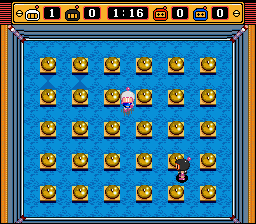 The sides of the ring can be used to propel players forward. 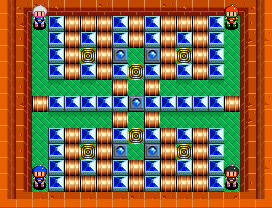 Use Pro Action Replay (PAR) code 7E1CCD:0B to access this stage. Note that both Stage 11 and Stage 12's digits use a different palette than the normal stages (orange rather than silver).

A standard battle arena, though the trampolines don't appear anywhere else in Battle Mode. The gem blocks will kill the player when walked on.

Taken from an earlier version of the power-up set found in the ROM.

The fire extinguisher power-up from Super Bomberman was set to appear again. Its graphics were updated, but it was ultimately discarded.

The black dots on the fingers of the gloves aren't present in the earlier version.

A different ice cream graphic, based on the one from the first game. The final game uses an entirely different design.

A very nitpicky change, but a few pixels on the upper-left were changed.

Amusingly, the sprite set for a Spike Bomb falling off a stage still uses this older design.

Four filler icons. Featuring a tiny Bomberman, a crap, a frog, and Dr. Mook (one of the main villains from Super Bomberman). The text says "mada", which means "not yet".

Discarded power-ups from the final version of the tileset.

A clock power-up, which would either reset the clock or freeze monsters. This would show up again, with minor changes, in Super Bomberman 4.

A question mark icon which would have done...something.

An unused flameproof vest power-up. Naturally, this would have protected Bomberman against explosions.

These unused animations can be found among the rest of the graphics for the Mr. Moai enemy. In the game, it only moves around aimlessly, but these sprites imply that it had a secondary behavior at some point in development, in which it would have opened its mouth and stuck out its tongue.

A font that is always loaded in VRAM, but never used.

While not entirely unused, parts of different tracks cannot be heard in normal play.

Only the first 39 seconds are heard in the intro. The whole song is 1 minute and 23 seconds, and it even loops!

6 seconds of this 20 second piece are heard in the game, and it also loops.

A sped up voice saying "Power," similar to the voice that says "Kick" when a Bomb Kick item is collected. This may have been intended for when the Power Glove or Power Bomb items are picked up, but in both cases a generic sound is used instead. Changing the values at 0x9BF7 and 0x9C3B in the US ROM to 0x60 will replace the collection sounds with this sound for the Power Glove and Power Bomb, respectively.

Although this exact sound effect is not used, the sample it plays is--it's the weird squeaky sound you hear in a few music tracks, like the first Battle Game theme.

There are several alternate palettes for sprites used in the game that seem to suggest that the Normal Game was intended to be multiplayer as well as single player, just as it is in other installments of the series.

Brain Bomber, boss of the fourth stage in the Normal Game, normally pilots a giant robotic counterpart to White Bomberman. Palettes for a black version exist as well. In a two player game, White and Black Bomberman may have faced off against two Robo Bombers, the second using these palettes.

Palettes for the other three major Bomberman colors being ejected into space after the Dark Stage base explodes. This could either be evidence of an earlier storyline where these three Bombermen are captured along with White by the Dastardly Bombers, or a four player Normal Game.

Palettes for Black, Red, Blue Bomberman falling back to Earth, as White Bomberman does in the next-to-last screen in the ending.

Debug text can be found in the ROM. While not as extensive as the menu in the first game, it's still something. This text maps to the unused font above, and starts at 0x16068 in the ROM.

This block of text is only seen in the Japanese version's credits. It is located before the director credit.

A special edition version of the game was released in Japan only. It, much like the special versions of Bomberman '93 and '94, is focused on fast multiplayer action... by way of removing features. 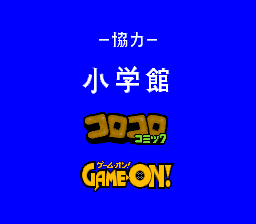 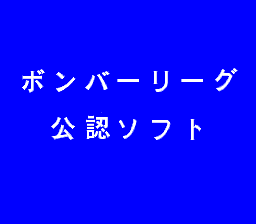