Pokémon? In my Bomberman? It's more likely than you think.

The cloud enemy (that splits into two smaller clouds when bombed) has graphics for an even smaller version of itself. Since the cloud only splits once, these go unused.

Itty bitty icons meant for dead Bombermen in multi-player are loaded in the VRAM, but never used. 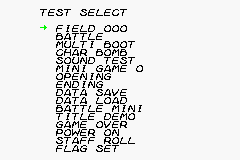 The Japanese logo appears onscreen in a more animated manner, which was simplified for the English releases.