Proof of concept that Bomberman and RPG elements can be combined into one explosive concoction.

Game Genie code 187-F2E-B36 (US), 187-FDE-B36 (EU), or 187-FFE-B36 (JP) will start the game in a debug menu. The level select is absent, only appearing in text form in the ROM. The debug menu is even capable of detecting the Game Boy Pocket (MGB) and Game Boy Light (MGL) handhelds. Bomberman Quest is the only game that performs this detection.

Press Start to go to the title screen, Select to go the sound test, Down to go to the ending sequence, B to go to the CHR viewer, and Up to go to the "COLOR TEST" screen (which only works properly when accessed using a Game Boy Color).

All other Game Boy consoles will display a white level palette preview.

Located at 0x9EAFF is additional debug text which hints that a stage select and enemy viewer may have once existed.

Pump also has a full set of graphics at 0x0B7CC0 despite only her front sprites being used for her after-game cameo. It's likely she was meant to appear as the hidden boss for Desert Land, as it is the only world without one in the final. Unlike the used bosses, however, she lacks a dialog sprite.

Two unused text portraits for Bomberman. The second one is identical to the used one except for the more complex shading.

There is a test border, a battle border and associated battle palettes that can only be seen when played using a Super Game Boy 2. Also OBJ_TRN is used when transitioning to the outdoors from a shop, however it does not load any actual data to the SNES's VRAM because the game for some reason loads the jmp C3F91100 found at the very beginning of the ROM. This command will also load when there is an error forming the picture data for the battle border and character transfers for the normal border. Game Genie code C0A-44E-A2E (US) will cause character data to transfer incorrectly, loading the OBJ_TRN error handler instead.

A small unusual listing exists that was likely used by the developers during testing to decide which enhancements they were going to add. 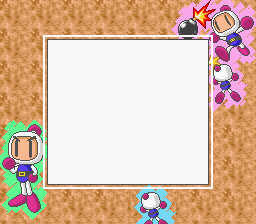 The palette setting for the battle mode menu is also completely unused in European and US releases. Game Genie code C05-FEE-2A9 will allow you to enter battle mode following a transmission error message showing the unused palette. The unused palette is located at 0x1B91.

(Source: nensondubois for battle border and palette access codes, and many other people for general border info) 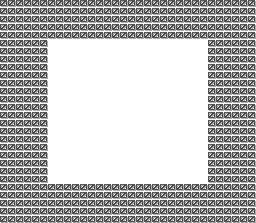 When PCT_TRN is not loaded, the game will map the entire border to little grey boxes with forward slashes inside. This border was used to notify the developers that something went wrong with transferring picture data from the PCT_TRN command. This border will not display if an error is tripped when using a real Super Game Boy 1 or 2. However, the border can be displayed by using the Game Genie code C0A-53E-D5D and the emulator BGB. 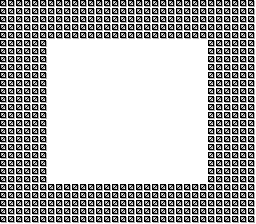