The "official" method of accessing these stages is to plug in a Hudson Super Joycard controller, turn on the turbo-fire feature, and hold X for several seconds. These stages can be enabled by hex editing the game's SRAM file and putting any non-zero value at hex address $1EA. The gold cartridge automatically writes FF to this address when writing its first save, thus enabling the stages by default. However, using the codes listed below is a highly recommended alternative. 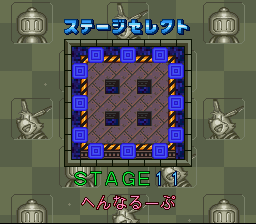 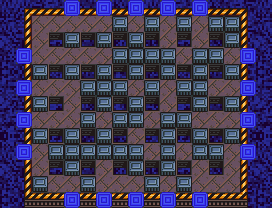 There are warps bordering the stage. Entering one will take you to a different, random warp. 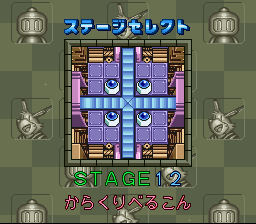 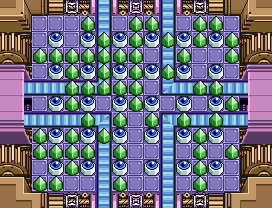 These conveyor belts have a unique property. When a bomb is placed on the belt, it can go underneath the walls and pop up on the other side. 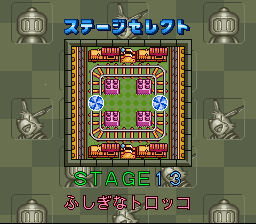 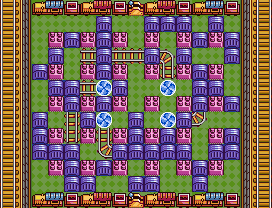 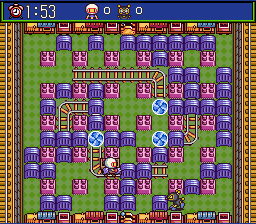 There's one mine cart in this stage. All mine tracks lead to random warps.

Hidden in the code of the game are three stages that seem to be purely for debugging purposes. None of these rooms have any music and the only sound effect that plays for any event is Bomberman's Battle Mode war cry. These rooms can be accessed using the Pro Action Replay (PAR) code 7E1038:XX. 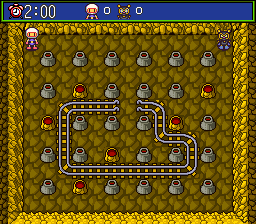 The first debug room, located at AC, uses the layout of Zone 3-02 (room 44), but has absolutely nothing at all, other than Players 1 and 2 (if playing 2 Player Mode). The settings for the round are the defaults, though the game does not end even if all players die. The game will lock up when the Sudden Death tiles start to drop as there is no Sudden Death graphic for Single Player maps.

It's also worth noting that while there is a Battle Mode stage which uses a minecart and cave setting (Stage 8: Riding the Trolley), that one does not use graphics from the Planet Fire/Firestorm levels from Zone/Super Bomberman 3. 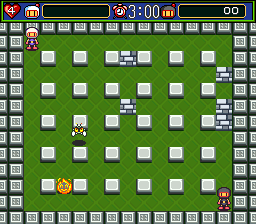 Beating all enemies makes three teleporters appear, all of which lead to... 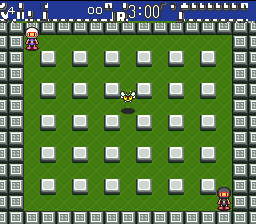 The third debug room, located at AE. It has a broken HUD, a single Dragonfly enemy, and nothing else. Beating the level leads back to Debug Room AD.

If the player enters either AD or AE from the other paired level, doing pretty much anything that plays a sound effect will crash the game. 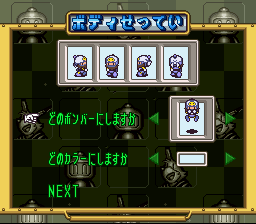 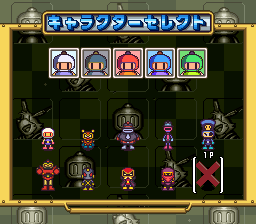 A 10th character named Subordinate Bomber was planned to be included in the game, but was ultimately left out. Hudson got pretty far with the character, though. Use the Pro Action Replay (PAR) code 7E625F:0A (7E627D:0A in the gold version) to access him in Battle Mode (turn it on after selecting a character), or 7E62FD:09 or the password 2YLPVD in Configure Battle Mode character editor. 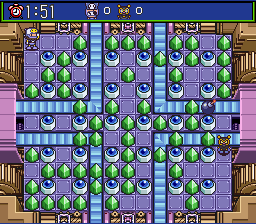 Subordinate Bomber has a complete set of character animations, but that's as far as they got. He has no character icon on the player select, and he uses Pirate Bomber's icon during matches. 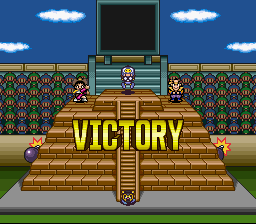 He also has no voice clips, so the game will freeze on the victory screen.

Warooi, the "evil" animal helper, only appears in the boss arenas of Zones 3 and 4. Under normal circumstances, the player cannot use him. Despite that, he has most of the animations the other playable Louies have.

This victory animation plays whenever the player clears a stage or wins Battle Mode while riding him.

If the player runs out of time in a zone or in Battle Mode, Warooi gets angry and punches the ground in frustration.

Hopping in a cart in the Zone 3 or 4 levels, or Battle Mode stages 8 and 13, show that Warooi gets motion sick! Poor Warooi!

Boss rooms don't have time limits nor mine carts, nor do they use victory animations for beating the player(s), so it's strange that Warooi would have these animations and more (see below). It could be that, like Subordinate Bomber, he was intended to be available to the player, but Hudson changed their minds.

These scrawled digits are stored in VRAM with the other, used numbers.

The logo for Super Bomberman 3 can be found in the game's graphics. There's a mysterious Plus sign right next to the logo too. 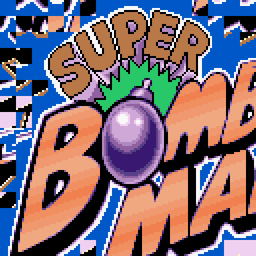 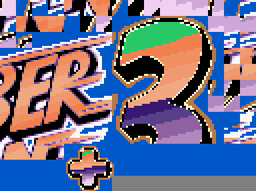 Warooi is the only Louie with no unique action. However, it would appear that he was intended to have a shoulder tackle which may have worked like the Push move from Super Bomberman 4. Given that Nagurooi (red) can already attack players, this may have been considered redundant.

All Louies have frames for jumping/being bounced across tiles, Warooi was never programmed for it, so his go unused. They can briefly be viewed if patch codes force the player to stay mounted after taking a hit, however.

This appears to be an unused alternate frame of Warooi's "trapped by a bomb" animation.

When creating Custom Bombers, the player is normally stuck with six colors schemes – white, black, red, blue, green, and yellow (palettes 00 to 05). By using the Pro Action Replay (PAR) code 7E62FE:07 on the Edit Mode screen, one can access the palette used by bosses.

There are more palettes such as 06, which locks custom characters in their "burnt" palette, but it's obvious that most of the colors are just random data. Bomberman also lacks a "boss" palette, so he ends up looking a little... different.

Text for a debug mode can be found in the ROM at 0x11EEFA. If a method exists for actually accessing this menu, it's currently unknown.

This is presumably the last version of this sound driver.

The following text is written to SRAM upon its creation.