Bomberman makes the jump to the SNES. There were no survivors. 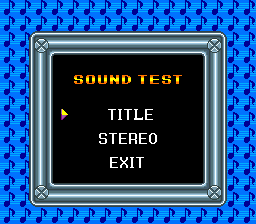 A sound test can be accessed by pressing R on Controller 5 at the title screen, which in turn requires a Multitap. Alternately, use Pro Action Replay code 7E00A43C.

Various debug options and text. This all maps to the unused font below. Text starts at 0x607D8 in the ROM. The code for the menu and most of its features still exists in the game code, but due to missing function calls and short-circuited functions it cannot be accessed without code modification. A rebuildable disassembly of the game can restore the menu.

A font that is always loaded in VRAM and is used in the debug menu.

Thanks to a disassembly of this game, some unused color palettes for certain objects were found.

A Green Bomb. This could have possibly been an early Pierce Bomb palette. Green bombs would later appear in the sequel's battle mode, albeit as a color-coding mechanic.

An old, darker palette for the Starnuts enemy.

An old palette for Gold Mecha Bomberman that's different from the final JP and US palettes.

Copyright information was updated and a trademark symbol added. The font is more colorful in the international versions, with a yellow streak in the center of the letters. The cursor palette was also changed.

The Japanese version has a short introductory cutscene that plays before the other demos. Despite having no dialogue to be translated or objectionable content, it was disabled from international builds of the game. Cutscenes do exist in the international versions, however and can be accessed by using Pro Action Replay code 7E00A433. Pressing the X Button during this sequence will allow players to start the game with nine lives.

Moguchan, an enemy from Stage 3, lost its mouth and had its color scheme changed from brown and red to green and purple. This was probably done because the original design could be interpreted as a negative racial stereotype of African-Americans.

The color palettes of Bombermen that appear after clearing Stage 3 and on the world map during the ending differ between regions. Notice that the highlights on the Japanese Bombermen look messed up, meaning these palettes could be remnants from earlier Bomberman graphics, left in by mistake.

Similarly, all eight of the Mecha Bombers received palette changes for the American and European versions. The first four now have colors identical to the four playable Bombermen.

The Bombermen in the victory screen of Battle Mode had their colors altered in the international version. This makes their appearance consistent with the rest of the game. However, a mistake was made in the change, and as a result the shading on Black Bomberman's head is now messed up.

The draw screen is also different between regions. In the Japanese version, the DRAW text is stationary and the four Bombermen fall onto the screen separately. In the international versions, each letter of the word DRAW falls onto the screen separately, and no Bombermen appear at all. The code and graphics for both screen types exist in both versions, but each version only uses one screen.

The following unused content was discovered when disassembling the game: