Need for Speed: ProStreet deviated from the free roaming formula of the previous three titles and took a dive into the scene of closed-track legal racing.

The PC port is also rather infamous for having a game-breaking bug in which you couldn't continue past the race results screen that would never get officially fixed until a modder came along almost 10 years later.

Just like in Need for Speed: Carbon, a hidden vinyl menu labeled "special" exists. This menu was most likely used to easily apply specific decals to cars to speed up the livery creation process. There are even car restrictions in place, so certain vinyls can only be applied to certain cars.

It can be made available via modding.

A 38th song exists within "ps_music.mus" which does not play in-game. The song in question is known as "Vertical Drop" by Splitting Adam. It doesn't exactly sound like it fits anywhere in the game, so one could assume that would be the reason it didn't make it.

The 38th song's strings even exist, though they've been replaced to that of "A Cause Des Garçons - Yelle" but with line breaks added.

In the 343179 Pre-Release build of the Xbox 360 version, an unused version of the song "No Good" by Plan B can be found within that version's "ps_music.mus" file. It seems to be the same version of the song used in the PSP iteration of the game. It likely may have been removed due to a large amount of censoring required to maintain the game's ESRB rating, which resulted in the developers opting for an instrumental version of the song instead.

Present only in the Wii version, an unused version of the song "We Know You Know It" by Foreign Islands can be found. The only noticeable difference here is the inclusion of the song's intro, increasing its total runtime by around 40 seconds or so.

Present only in the Asian release, files for what was once supposed to be Laguna Seca Raceway exist. Despite the name, the only thing that's actually there is a textured flat plane that emits dust and has a texture of Portland International Raceway on it, viewed through Google Maps circa 2007. 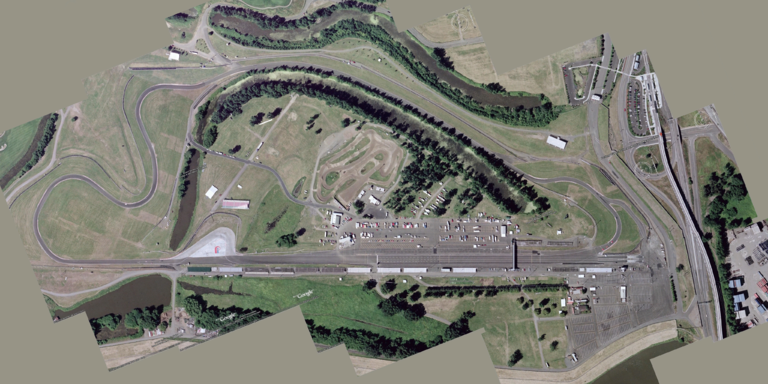 Present in only the leaked "Alpha 61" build for the PS2, placeholder tracks for both Laguna Seca Raceway and the Porsche Leipzig race track exist, despite the PlayStation 2 and Wii versions never actually receiving Leipzig. Continuing the trend of using early versions of already existing tracks being used as placeholders, these two are both of a very early version of Mondello Park.

Another unfinished track referred to as "ShutoExpressway" exists in every version. The track actually has a proper road spline, and even has some rough level scenery consisting of various windowed cuboids placed on some basic pieces of land. The destructible canyon barriers from Need for Speed: Carbon even make a return. It is unknown if the barriers were a cut concept or simply just a placeholder.

The track layout itself is a recreation of Shuto Expressway Route 11 and is fairly unique as it is the only track that allows driving on both separated and elevated sections of road at the same time. This track was most likely abandoned for the version of the expressway included with the Booster Pack.

An unused track found in the Asian PC release of the game. Judging by its name, the track was designed to test lighting and other light behavior. This course shares majority of its assets with that of Infineon, and even contains some unused Super Promotion assets.

Another unused track found in the Asian PC release. This course shares a similar base to L6R_Lighting as majority of its assets are derived from Infineon. As the name suggests, this track may have been used to test LOD (level of detail) mesh generation that is used throughout majority of Black Box's Need for Speed titles.

This track is another one found in the Asian release. This is similar to the Laguna Seca and Leipzig courses found in the Alpha 61 build of ProStreet for PS2 because of the fact it continues its trend and uses Mondello Park as a base. This track, like the name may imply, was used to test Black Box's "NIS" (non-interactive scene) files, which are used throughout Most Wanted, Carbon, ProStreet, and Undercover.

The final unused track found in the Asian release of ProStreet is a track named "TestTrack." It is not fully clear what this track could have been used to test, but it is similar to L6R_NIS and the Alpha 61 tracks due to the fact it is another track which uses Mondello Park as a base.

A number of features seen in previous games can be found leftover in ProStreet; AI behaviors and setups for police vehicles and traffic cars, damage setups for them all including helicopters. Their vehicle behaviors are even valid, but don't do much (apart from SoundCop and ChassisSimple, the former silencing car audio while the latter having no notable effect on AI opponents but makes the player's car uncontrollable and shortly flip over) given police are completely absent in this game. Spike strip functionality also remains and can make sparks emit from the car's tires if the vehicle uses DamageRacer behavior, but does not affect performance nor handling in any way.

This is a placeholder for the game's final cutscene, "fmv17_showdown_king_def", only present in the Asian PC release and the Xbox 360 prototype. It is a recording of the cutscene played back from the in-game camera editor with noticeable rainbow banding, indicating that it was recorded off of a console. The other part of the cutscene telling the player that they have defeated the Showdown King has also been omitted.

A short placeholder for the Super Promotion unlock FMV, only present in the PlayStation 2 and Wii versions. The audio is that of a cut Need for Speed: Carbon PSA, which was found in a prototype of Need for Speed: Undercover.

The version that has been uploaded is located in the MOVIES\WIDESCREEN directory of the Wii version as it is of a higher quality; the contents are the same between versions.

Another short placeholder video left in the MOVIES directory of every game version. It is not referenced in the debug menu.

A short cutscene present in all versions that is also not referenced by the debug menu. The exact purpose of this file is unknown.

Yet another short placeholder video only present in the PlayStation 2 and Wii versions. The filename of the used cutscene shortens "defeat" to "def".

This can also be found in the MOVIES\WIDESCREEN directory of the Wii version.

Present only in the Asian release. It would've been a placeholder for the PSA that plays when starting up the game, but the PSA in this game shares a cutscene with the opening logo. For some reason, the audio is much longer than the actual video; the length and the various car noises hint at it being the audio for an early attract cutscene.

This is an unused tutorial cutscene that was supposed to give players a general overview of the career. Judging by the text, it likely would've played in the "career overview" menu. The cutscene features a seemingly early version of the career map, and all of the text for it is still in-game, though some of it goes out of the baked-in text box.

All Wii releases have an .ELF file containing debug symbols named after the game, region, and stage of development present in the root of the disc.

However, in the Japanese Wii version, many more leftover files from earlier stages of development are present in the root of the game's filesystem.

These files can be opened with any text editor. They contain a list of all of the files burned to the disc along with their hash and the directory on the computer in which they originated from. The only differences between the three files are some of the hashes at the beginning of the file list. The first few lines from all files have been put here.

These files contain everything necessary for the game to boot, all put into one large file. They seem to be game executables only meant to run on developer hardware, since trying to boot the game with them in Dolphin after separating their contents results in the debug log throwing an error.

These are referred to as the RVL_CONFIG_FILE by the file list. They share the same header as the DSF files and are all the same size. It's unknown what these files do.

Two directories named ProStreet08Japan_Data and ProStreet08JapanMilestone_Data contain residual data from MetroWerks CodeWarrior, an integrated development environment commonly used for game development on the GameCube and Wii. The file CWSettingsWindows.stg present in the root of the directory appears to be a program settings file that stores what parts of the software were currently being used, [1] and the second file, TargetDataWindows.tdt, present in the Default_Wii_Project subdirectory, appears to point to various libaries used to compile source code. [2]

The original release version. The PC version included a code (COLLECTORSED) could be used to unlock Collector's Edition content;

Released on December 18th, 2007 for Windows, and in February 19th and March 21st for PlayStation 3 and Xbox 360 respectively. It disables the above code for the PC version, along with the unlockallthings code, but includes some free content of its own alongside two purchasable Premium Car Bundle packs.

The Premium Car Bundle packs include 12 cars altogether, and another two which require the purchase of them (namely the Bugatti Veyron 16.4 and the 1992 McLaren F1):

A Steam version, added May 4th, 2013 can be found on SteamDB (1 year after official servers were shut down). Nothing is known about this version. Electronic Arts may originally have planned to put this game on Steam's store or even into another game pack such as EA Racing Pack, or as a promotional giveaway. The reason to why the game was not put on Steam into this database is currently unknown.