Kirby's Dream Land 3 is the third game in the "Dream Land" series, and the only one to see a release on the SNES. In addition to Kirby's usual arsenal of powers, he also has the aid of Gooey, a strange sentient blob, and six animal friends, who can alter his powers drastically! Also notable for being the last first-party SNES game released in North America. 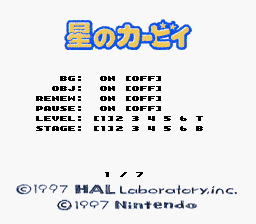 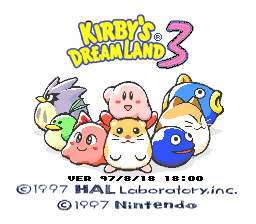 Change ROM address $387E to 01 (code: 00B87E01) to enable a rather extensive debug mode, which can be accessed by pressing Select on the title screen. If you press the L and R buttons at the same time on the Title Screen the ROM build date will be shown for as long as you maintain these buttons pressed. The build date does not differ between the Japan and USA versions.

There are seven pages worth of options, which can be cycled through with the L and R buttons. Pressing A will exit the menu and proceed to the File Select screen, whereas pressing Select/Start will load a stage based on options set in the menu. Options are stored in SRAM (starting near $5E02) and some (such as the current page) persist after restarting, although others (such as sound test values) are cleared when the menu is opened. 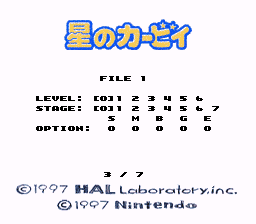 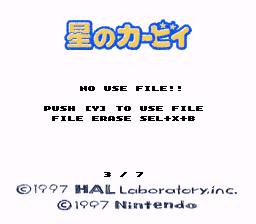 These three screens edit each save file. One thing they can't change is which Heart Stars you've collected.

If the given save file does not exist, it can be created with the Y. File can also be deleted using Select+X+B; however, Select will also load a stage based on the first screen, so this can only be seen when Select is pressed last (and even then, the stage will be loaded).

A sound test. You can play every track and sound effect in the game here. The track stays playing while you navigate the other menus, so enjoy your favorite tune!

Choose the song or sound effect to play with Left and Right, and play it with X, Y, or B. This screen also displays a name for each item, which may have been filenames used in development.

A screen that seems to be used to record the player's movements for the title screen demos, and then play them back. It doesn't appear to be functional anymore, and tends to delete save data. 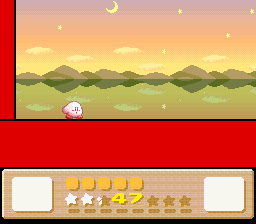 There are three debug areas, which have a nice variation of the lake background from Level 1-5 that's not used anywhere else in the game. To access them use the codes 4053D328, 4053D32A and 4053D32B on Level 1 stage select (or use the debug mode described above).

The first stage consists of two rooms, and seems to test the fade-outs in doors, or simply having different rooms.

The second starts in a room with spikes and three doors. They don't really cover entire tiles but Kirby still collides with them. The lower left door contains three animal friends and different slopes and platforms.
The upper left room has three misaligned Shotzos over three star blocks, water and two enemies.
The right room has some platforms, two doors and Nago. The left door takes you back to the spike room, while the right door takes you to a long room with different types of terrain. (Slopes, water, sand, ice, influencing movement, damage...) At the end there's a door, but it doesn't work. 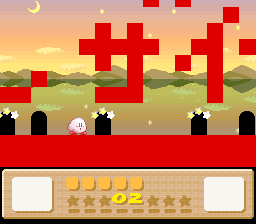 The third stage is much larger than the previous two. It starts with a main room with several doors, and some Japanese text over them (supposedly describing what are the rooms below them are about).

BGM 3, K3BOSS2 (as named in the Music Room), is a fast-paced remix of Egg Catcher from Kirby's Adventure, situated between K3BOSS1 (main boss theme) and K3BOSS3 (mini-boss theme).

BGM 9, K3EVENT2, is technically used in exactly one place; in the fourth stage of Grass Land (the one with Goku & Chao), playing through normally instead of going for the Heart Star will cue this track instead of the mini-boss theme in the small room above Boboo. However, since "mission complete" is the preceding K3EVENT1, the title of the track suggests that it was originally supposed to be the theme heard when the player fails to complete a level's mission. The final "mission failure" song is BGM 29, K3LEVEL5; incidentally, the tracks of the remaining levels are K3LEVEL1 used for Grass Land, K3LEVEL2 used for Ripple Field, K3LEVEL3 used for Cloudy Park, K3LEVEL4 used for Sand Canyon, and K3LEVEL6 used for Iceberg. Coupled with the swapped positions of the Sand Canyon and Cloudy Park themes, this could be evidence that K3LEVEL5 was meant for an early level order including an additional level map (which would explain why it's so long), or that it was composed late into the game's development specifically to replace K3EVENT2.

Unused Sound Sample
There's an unused sample which is loaded in Ripple Field 2's sample set, being the first instrument loaded with the sample set at slot 28. It's a pulse wave which is not used anywhere in the song. This could suggest that the song was meant to have a more synth-ish or 8-bit approach at some point, as a 50% square wave is already used in the song, while the unused pulse wave is a 25% square wave.

Here's a demo of it in action, replacing the trumpet used in the song:

Surprisingly, the difference between the International and Japanese versions of Kirby's Dream Land 3 comes down to just 41 different bytes. All of the graphics (including regional logos) are found within both versions, and most of the changes merely choose different graphics to be loaded. 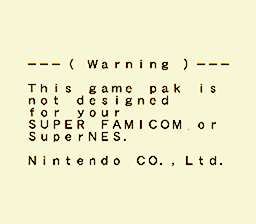 This screen is displayed in all versions of the game if the region byte is anything from $03 to $0C.

Besides the obvious platform name changes...

The Japanese title screen is animated, while the International version isn't.

Weirdly enough, although the International version features the rōmaji pill-shaped Nintendo logo that has continuously been in use since 1975, the Japanese release features the original Kanji logo used from 1889 to 1950. This is rarely seen in Japanese versions of Nintendo games, with most opting for the usual rōmaji logo.

For some reason, the Japanese version refers to sound effects as FGM (foreground music).

The Japanese version has a pun on the Nintendo 64 name, relating to the SNES being 16-bit compared to the 64-bit N64, which had already been out for nearly two years by the time Kirby's Dream Land 3 came out in Japan.

This screen appears on start-up if something other than a standard controller is plugged in.

Additionally, when set to Japanese, the end credits has a unique feature. For the main game's good ending, the credits are displayed in kana, featuring a font that mimics the appearance of a child's handwriting and with a doodle of a red star on each side of the credits' headers. For completing Boss Butch, the credits are listed in English and with a more "computerized" font, which is the case for both versions when in the International setting.

In the SNES version of the game, the background clouds in the Boss Butch rematch against Dark Matter/Zero are blue and red. In the Virtual Console re-release, they are orange and green, most likely out of epilepsy concerns due to their scrolling speed. Additionally, when Zero makes his appearance, the rapid white flashing seen in the SNES version is replaced by slower gray flashes in re-releases, also due to epilepsy concerns. 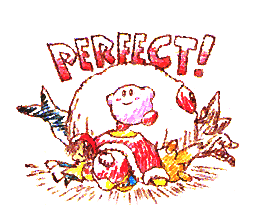 There's a hidden screen in the game which is only accessible at the end of Boss Butch mode, and even so, it's rather cryptic to find it. To get to it you have to press X+L+R after defeating Zero, just before the screen fades to black. If done correctly, this screen will appear instead of the credits.