Chrono Trigger...does it really need a description? If you're even remotely interested in RPGs, you've probably played Chrono Trigger or know someone who absolutely raves over it. While rather basic in terms of gameplay, its audiovisuals and various concepts (not the least of which is time travel) put it among the SNES RPG elite.

And of course, a game this big has its share of unused content: unused enemies (including robo-racer Johnny!), unused items, loads of unused graphics, and even (rather famously) songs that were present on the official soundtrack but weren't used in the game itself!

On top of that, a prototype build features a ton of differences from the released game, revealing that some aspects were very different earlier in development.

All in all, a very fascinating game. 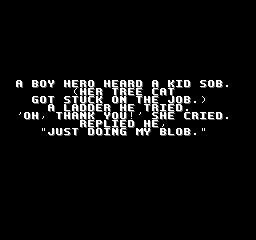 A Boy and His Blob is the patriarch of the puzzle/platform genre, which is impressive given the very limited development time. It's also one of the most bizarre and unique NES games.

Pictured here is one of the unused screens, which contains a limerick. Judging from the slightly suggestive ending, it was likely used to test the screen drawing code and not actually intended to appear in the final game.