Pokémon Gold and Silver were the long-awaited sequels to the original Red, Blue, Green, and Yellow that started the whole Pokémon craze. Being released as two of the first games for Nintendo's then-new Game Boy Color, Gold and Silver benefited from the new possibilities of colorful Pokémon and maps. Due to the prolonged development time, there are many remnants of early content for nearly every Johto city along with some unused events and debug menus. 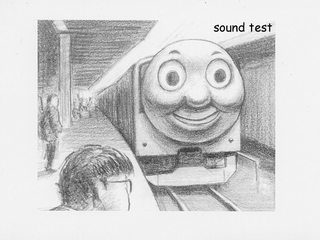 Blinx: The Time Sweeper is Microsoft's attempt at creating a mascot character for the Xbox. It follows a cat and his time controlling vacuum cleaner on a mission to prevent the end of World B1Q64 and rescue its princess from the evil Tom-Tom Gang.

Pictured here is a sketch of a Thomas the Tank Engine-esque subway train found in the game's data. Although code still exists to bring up this screen, it is unknown how to access it.