Kirby's Adventure is the sequel to Kirby's Dream Land, which set the standard for all future Kirby games with the introduction of copy abilities as well as being a much longer game than its predecessor. It's also one of the most graphically-advanced games released for the NES, released near the end of the console's life cycle. It has a great amount of unused content, too – some of which would be recycled for future Kirby games.

It was remade in 2002 for the Game Boy Advance as Kirby: Nightmare in Dream Land, followed by a 3DS port in 2011 as 3D Classics: Kirby's Adventure, using the original NES resources with minor differences like depth effects.

According to the game's director, Masahiro Sakurai, several abilities, such as Rocket and Animal that were implemented in future Kirby games, were cut out of the final game, including one in which "Kirby could shrink down." These tiles of a tiny Kirby are found in sprite bank 8C, along with the graphics for the Mike and Ball abilities. The oddly-sized Kirby would have been used for a shrinking animation (Kirby does the raised hand pose for abilities like Crash and Light that aren't demonstrated right away).

The Mini ability might have been replaced with the UFO power. All of the other ability tiles are close together in graphic banks 80-99, while the UFO Kirby graphics are located in bank C6. UFO is also the last normal ability by ID, further supporting this theory.

Twelve years later, this ability would finally be realized in Kirby and the Amazing Mirror...although in that game, you can't slide while using this power. 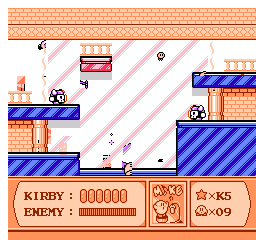 These sprites can randomly appear on-screen from abusing the Mike Overflow glitch, as seen here.

The song that plays in the Fountain of Dreams cutscene prior to facing Nightmare only plays for around 19 seconds before stopping. However, letting it play for longer reveals that the last part loops 2 times before the main instrument is removed, leaving only percussion playing.

An untranslated duplicate of the invincibility icon, stored in bank 14. The icons normally used by the game are stored in banks 40-4B.

Graphics for seven different water tiles of this style, stored in banks 24-27. Only two appear in-game.

This icon is stored with the rest of the ability icons, and was meant to be used when Kirby hops into a cannon, but doing so doesn't change the icon. It is shown during Mix's ability roulette wheel, but due to how fast the wheel moves it's impossible to get a good look at it without using something like an emulator's frame advance feature. It was eventually restored in the European versions of the game, and the 3DS remaster 3D Classics: Kirby's Adventure. No equivalent exists in Nightmare in Dream Land.

Banks 13 and 50 contain an unused dark room tileset! They are assigned to graphics set 22 and would have used palettes 8B-91, all of which are stored immediately after the ones used in-game (graphics set 21, palettes 84-8A).

The level intro tileset seems to contain graphics for an early version of the level hub HUD. This is much darker than the HUD used in-game and the graphics are very different.

A 7th stage door graphic. No level has more than 6 stages, rendering this unused.

Two of these three frames aren't shown in-game at all. The Poppy Bros. Sr. graphic is similar to his normal death frame, but his feet are on the ground. The Rolling Turtle graphic is strange – perhaps he could hide in his shell during battle?

The frame for Mr. Frosty is actually used, but it's very difficult to see normally: If he doesn't have enough room behind him to walk backwards to toss an ice cube (by carefully tricking him into stopping right before hitting a wall), he will fall on his head with this animation, and cause him to ram forwards into the wall.

Apparently, the crane game was originally supposed to give you three credits, as evidenced by the presence of a "3" with the rest of the numeral graphics. Setting address $7BB to 03 as the game loads will give you three chances, as well as display this unused graphic, though it will still only count up to two Kirby plushes at the end of the game.

At ROM address 0x7BAC9, the unused text string "~Star General ~" is found among the titles used for the file selection screen. The actual game goes from "~Swift Hunter ~" to "~ Star Herald ~" upon reaching 40% completion. 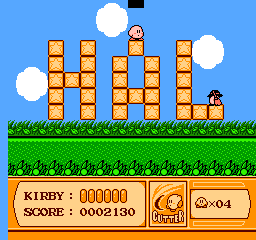 At the end of the first room in Stage 2 of Vegetable Valley is the name "HAL" in the form of many Star Blocks; however, it is inaccessible due to the Warp Star beforehand that forces the camera to stop going to the right. However, if you manage to overload the game's sprite memory (e.g., by throwing Cutters while several enemies are present) as the Warp Star scrolls into view, it will fail to load, allowing you to see the HAL blocks. This room can also be accessed by unloading the Warp Star by walking away from it to the point where it is offscreen repeatedly.

Oddly, a Broom Hatter is present on the "L". There is also a door just off the top of the screen that leads to the next area, though it cannot be reached normally. This is due to the way Warp Stars work; a regular exit representing the Warp Star's destination must be placed within the level, though these are typically not visible.

Many HAL rooms, including this one, are also present in Kirby: Nightmare in Dream Land, but they are inaccessible without codes.

Hidden HAL rooms would eventually become a staple of the Kirby series starting with Kirby Super Star Ultra, with these ones actually being accessible, though very well hiddenǃ

The peculiar string RGKK_SetStillX can be found in US revision 0 at ROM address 0x7FFF0. This location seems to contain random data in every other version.

The spacing of the "KIRBY'S ADVENTURE" text is incorrect on the first few story pages in US revision 0. This was fixed in revision 1.

The "Li'l Traueler" ranking in US revision 0 was corrected to "Li'l Traveler" in revision 1.

In the Japanese version and US revision 0, Kirby can trigger a Star Switch with the Mike ability if he is touching the very edge of the sprite's hitbox. If this is done when Kirby has one Mike left, the counter will underflow, which then causes the Mike to exhibit a variety of interesting graphical glitches (as seen here). This was fixed in revision 1 by preventing the Mike from interacting with the switch.

Burning was renamed Fireball in the international English version. This localized name would only be used for one other game, Kirby's Dream Course, with it being referred to as Burning in all regions in most future Kirby games, including Nightmare in Dream Land (though Kirby's Block Ball and Kirby 64: The Crystal Shards would call it Flame and Burn internationally, respectively).

"Icecream Island" was changed to the slightly more natural sounding "Ice Cream Island". The same change is made in Nightmare in Dream Land. Also notice how the stars on the bottom of the level intro screen were rearranged.

In the Japanese version, Kirby's vitality is restored when the scene transitions to the Star Rod area after defeating Heavy Mole, the boss of Yogurt Yard. This causes it to also be restored in V.S. Boss! mode after beating Heavy Mole. In the international versions, this is changed so that Kirby's vitality is restored after he exits the stage and moves on to Orange Ocean, so that it is not restored in V.S. Boss! mode. This fix is not present in 3D Classics: Kirby's Adventure, while Nightmare in Dream Land‍ '​s Boss Endurance fixes the issue in every region.

Several tracks in the game were edited slightly to compensate for timing differences on 50Hz televisions, usually pitching up and changing the speed, but for some reason the intro to Vegetable Valley was rewritten entirely. This change is only made in the NES PAL version (also used for the Wii Virtual Console), and not subsequent European releases where the NTSC version is used by default.

In the international releases of the game, the various stage themes each have two entries in the sound test: one with the intro, and one without. Some of them are not present in the European version.

The European translations appear to be based on the English version. The French version is the only one that properly uses the Cannon icon (now renamed Canon), which was only restored for other regions in the 3D Classics version.