Persona 2: Innocent Sin is a remaster of the PS1 version and the version people outside of Japan could finally play... though there was some censorship, mostly due to changes regarding the CERO ratings board in Japan.

Like the PlayStation version, there's a debug menu that is invisible but still works. This contains event viewers, dungeon viewers, sound tests, and more. 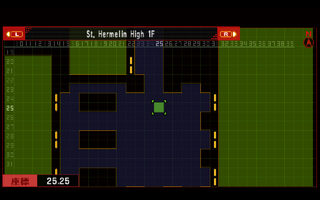 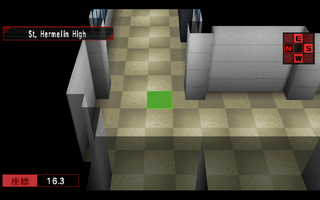 There's an option in the debug mode to view every dungeon in the game. However, trying to view most maps will crash the game except for the DLC maps and one map from going down the river.

Apply the below code to enable a debug CPU and GPU meter.

There's two unused items meant to allow the entire party to absorb single physical or magical attack for one turn. Attempting to use either of them will crash the game, though. 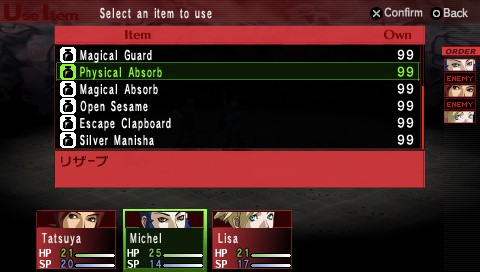 A placeholder background image. The text translates to "Black Background". 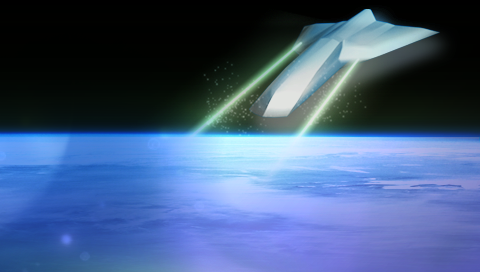 Probably the strangest thing: save and splash icons for the game Big Bang Bang, a demo made by Sony a month before the PSP launched.

Unused text for the conversation that takes place before the battle commences can be found in F_BE.BNP:

There's unused text for the CD shop lady in Giga Macho in CD_SHOP.BIN:

If using the debug mode to visit Trish healing fountain and attempting to leave, you'll get a message that was used for developers/game testers. 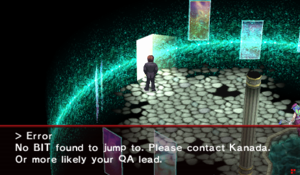 There is an unused boss fight against Devil Joker, a boss that would go unused and despite that get an English voice-over.

The code for the event that leads up to the boss fight itself would softlock the game at certain parts, and was therefore slightly altered at those few parts with Angel Joker's event. As such, it might not be perfectly accurate to how it was meant to be; everything starting from the boss battle itself is unaltered.

While neither Atlus nor the game's developers have commented on the reason, the most accurate speculation is that these changes were made both to prepare for an American/European localization, as well as the CERO ratings board having a rule in which they prohibit the use of historical, real-life people and organizations in fictional media.