Similarly to the first game, there is a flag which enables several debug features when set. To enable the flag, use the Pro Action Replay (PAR) code C0FFF001 or change the byte at offset 0x00FFF0 (in an unheadered ROM) to any nonzero value. The next sections all assume the debug flag is set.

The game also checks for buttons being held down at the end of the intro (as the title logo starts to appear). The easiest way to use either of these is to hold down the button and press A while the intro is playing. 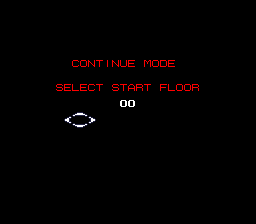 If Up is held down when selecting "New Game", the game skips the opening credits and starts you right at the beginning of the first mission with all party members given their default names. If it is held when loading a saved game, you can select which mission to go to.

(For some reason, the map cursor sometimes shows up on this screen and some of the debug menu screens.) 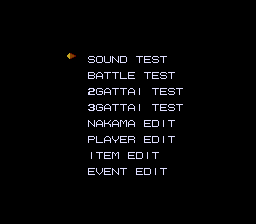 The debug menu works similarly to the one in the previous game, with the addition of a mode for testing the results of fusing various combinations of two or three demons. The scene viewer from the previous game's debug menu has also been changed to a battle test screen.

From each individual screen, pressing B will exit the debug menu completely. 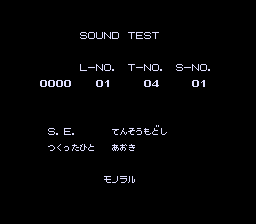 More or less a standard sound test, with music and sound effects combined into a single menu. The music selections begin at value 00E2. Pressing X switches between stereo and mono. 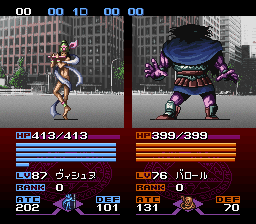 This screen shows a mockup of a battle scene. Pressing A plays an attack animation, and pressing the D-Pad will display five numbers at the top of the screen which allow you to customize the scene. The first number is which attack animation to use, the second two are the units doing battle, and the last two select the backgrounds to display on either side of the screen. 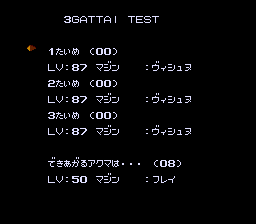 These two screens are used to test the results of fusing any possible combination of two or three demons. Pressing A will display the result of the fusion at the bottom of the screen.

The remaining options all involve editing existing save data. Upon selecting one, you'll be prompted to load a game, and when exiting the screen, you will be prompted to save the edited game.

This screen lets you edit the demons in your party. The first field selects one of the 45 available slots. Pressing A toggles whether or not there is a demon present in that slot. The second field selects the demon's class, the third selects its type, and the fourth selects its rank (1-99). The demon's stats are shown in the bottom right corner.
The "Extra" flags at the bottom trigger which of the game's 64 skills are available to this demon, as if inherited from fusion. To switch between "Extra" flag mode and other data editing, press the X Button. 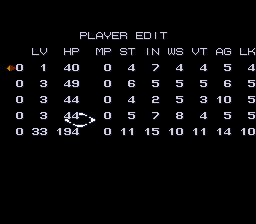 The rows on this page represent the default player characters, in the order displayed on the save screen, as well as Ogiwara. The columns represent the stats of that character; HP and MP can never be increased, as they are determined by the various other stats. Stats cannot be increased infinitely, but a character can be leveled up or down by pressing in the respective direction on the D-Pad, granting/freeing up previously granted stat points. 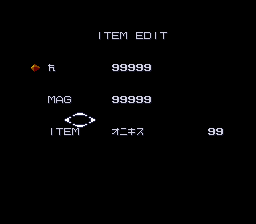 The item edit screen allows you to edit how much Makka and Magnetite you have, as well as how many of each item is in your inventory. The first field next to "item" represents the name of the currently selected item; pressing Up/Down cycles through each type of item. The number to the right of it is the current quantity of that item (if no number is displayed, it means you don't have any). Pressing Up/Down will increase or decrease the quantity. 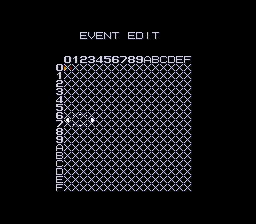 Like the first game, this screen allows you to toggle various flags on or off, though the meaning of each one still isn't known. For some reason, the cursor is also one place to the left of where it should be, meaning it is sometimes obscured by the column of numbers on the left side. 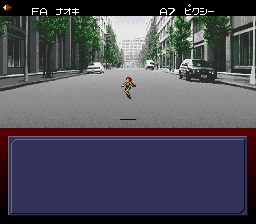 There doesn't seem to be a way to exit the conversation normally; once the conversation ends, it just lets you change the character types again and start over. The only way to return to the game is to either clear the mission by pressing L, or by setting memory address 7E0BFE to zero. Doing the latter will cause both yourself and the demon to change into the types you had selected during the conversation (although both characters' stats will be the same as before). You can exploit this to turn demons into stronger or weaker demons, human characters into demons, or vice-versa.