Raidou Kuzunoha vs. The Soulless Army lets you fuse demons with weapons. Needless to say, the Jack Hammer fusion did not turn out as expected.

Input the values listed below into the xxxxxxxx portion of the code to enter a debug option. 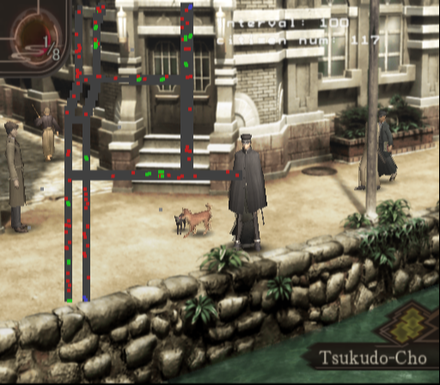 This is a citizen numeration tracker/generator. It allows the player to reduce the amount of traffic from in-game NPCs.

Below are some possibly unused morph graphic mechanics featuring similar graphics to the unused cutins listed below. Below are featuredː Thor, Cerberus, Jack Frost, Turdak, Tsuchigumo and Ghoul. 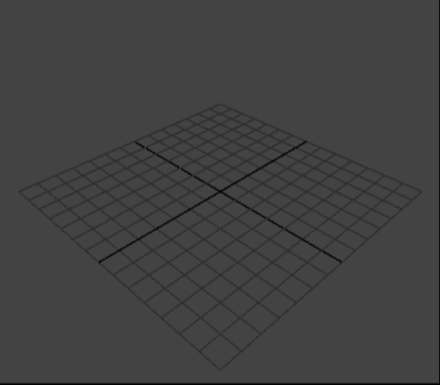 The above tile, is used for a 3D model and a flyby camera.

It appears to be a remnant from development and was possibly used with the Model Viewer.

Simply named "player", this is a prototype 3D model of Kyouji Kuzunoha from Shin Megami Tensei: Devil Summoner. Not only has Kyouji never appeared in a 3D game, but his particular appearance here is only ever seen in Devil Summoner. Additionally, this is before Kyouji's body has been possessed, since his possessed form features an entirely different hairstyle. This model is similar in nature to Lisa Silverman's appearance in Shin Megami Tensei III: Nocturne, since they are both characters that have never been in 3D games. This model contains unique animation data that cannot currently be viewed.

A re-textured version of Kyouji is also hidden in the game. This time, he's back with a vengeance. Not-Kyouji wields a number of weapons, all of which have additional effect textures to go along with their usage. This model has unique animation data that can be viewed through the debug menu. Below are his animations. 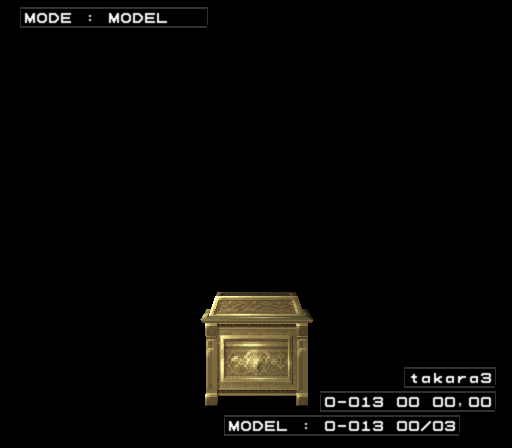 The Mystical Chest model from Shin Megami Tensei III: Nocturne is in the files for this game, but not used as a completely different model is used for chests instead.

Eleven full-screen images meant for a Tokyo Game Show demo of the game. These images can be found inside '\files\cutin\'.

Some more images that were used in the demo can also be found in the '\tgs\' folder.

Some battle textures found inside the 'battle' directory. The demons are Jack Frost, Turdak and Thor.

Mokoi has a battle portrait found inside '\battle\dvltktex\' which is just named 'mokoi' in contrast to all the other battle portraits that are numbered with hex. There is another Mokoi portrait which seems to be used in the final game, so this one is unused.

A few Tokyo Game Show save files are leftover in the game's files inside the \tgs\ folder. They have demon setups and what not made by the developers to possibly show off stuff, or maybe they were intended for the demo. Regardless, the TGS events can be viewed with these save files down below. You can only use them on the Japanese version of the game.

The music for when you encounter a rare demon in Digital Devil Saga 1.

Battle for Survival theme from Digital Devil Saga 2. One interesting thing to note is that it sounds a lot different from the final version.

Another boss theme from Digital Devil Saga 2. This one is used for the main bosses.

This translates to, "It's OK to delete this".

This translates to, "I don't care if you delete this file". 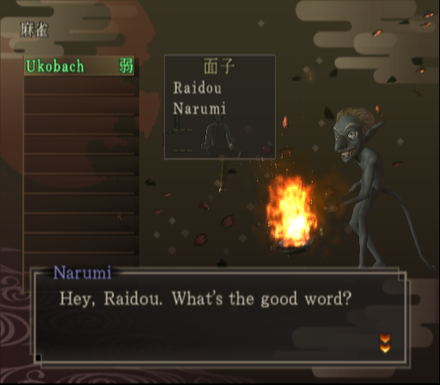 It is possible to get the mahjong mini-game nearly functional in the North-American version but it's not enough. This does work in the Japanese version on the other hand with no problems.