The sequel to the original Shin Megami Tensei, with more demons, improved graphics and laying the groundwork for even more future mechanisms and fan-favorite recurring demons. 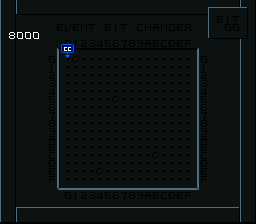 A function is added to the COMP, allowing to operate a Boolean Flag Editor not unlike those found in Shin Megami Tensei and the Majin Tensei games.

RAM Check also contains a plethora of additional functions. Depending on which button is held down on controller 2 whilst selecting RAM Check in the menu with controller 1, different functions are accessed:

The character's alignment is displayed in hexadecimal under the Moon Phase. Default value when starting up the game is 80. It is not determined what the two digits after the alignment value mean.

If the L or R buttons are held down while a turn of combat starts, all enemies are immediately wiped out.

While in Debug mode, the Protagonist cannot be killed by loss of HP; his HP will return to their maximum amount the moment they hit 0. However, instant-death-attacks like Mudo still work.

In a 3D Map, press L or R on controller 2 to cycle through the various background styles for these areas (presets of walls, floors and ceilings). 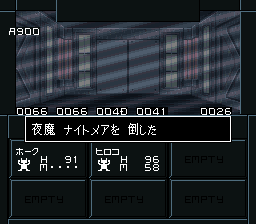 Several hexadecimal numbers are displayed during battle at the bottom of the display window, relating to damage calculation. Damage calculated may differ from what is displayed in the text box, as an attack never deals more damage than the target has HP, in spite of the calculations. 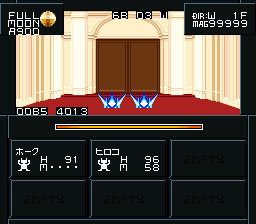 Pressing the Start button inside a 3D Map accesses further debug controls. On top, two coordinates are displayed, X and Y. The entire game actually takes place on a single gigantic map. X coordinates reach from 00 to 7F, Y coordinates from 00 to 3F. Up and Down on controller 1 change the Y coordinates, Left and Right the X coordinates. Additionally, this menu allows for Battle animation testing. Pressing L or R cycles through the animations, the A button plays them. Holding down the B button while cycling through coordinates or animations will move forward by 16 instead of 1. Pressing Start will resume regular gameplay.

The above Animation Testing has a secondary function. First, select an animation number. It doesn't matter if the animation is being played. Press Start to return to regular play. Now press X on controller 2. This will summon a demon with the same ID as the number you selected. You can also spawn two enemy groups. Select an animation number as above. Then press X on controller 1 to activate two-enemy-group-mode (confirmation sound is heard). Now if you select a second demon ID from the animation list and press Start, then press X on controller 2, you'll be faced with two demons at once. You can resume single-enemy-mode from these test-spawns by pressing the X button on controller 1 again while selecting animations. You will hear the cancel sound effect as way of confirmation. Everything past 0136 bears a potential for bugs as the enemy demon index does not reach to this point, but the animation index does. Thus, Glitch demons might occur. (And thus, you might run into such nonsense as "Flight Bufu", "NO DATA Mazionga", or "threw a bomb at you! Megidolaon". These glitch demons utilize sprites for Sword Fusion and can potentially break the sound engine or the running game itself.)

You can cancel the Level Up screen by pressing the Start button without distributing any points. 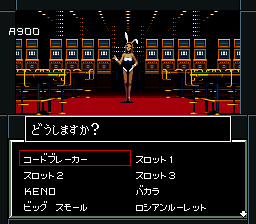 Using the above position changer, at coordinates 48 3E, you will arrive in a large room with no exit and a smaller room in the middle. This smaller room contains a Debug Casino, allowing to play every minigame in the game (though still requiring Coins for the Casino games, minions for Russian Roulette and Metal Cards for Code Breaker).

Additionally, some debug features for the Slot Machines can be found, though their exact purpose is not clear. Slot Check 3 and every option after it in the menu will crash the game, implying the features associated with those menu items were taken out of the final game.

Hidden in VRAM while on the 2D Map screens is a sprite of what can be identified as Pac-Man.