Ring, Ring. It's the Joker. Will you tell him your dreams?

There's four unused Bolontiku bosses that go unused. They can be seen shortly before the boss battle starts, which you can only fight five normally. These four share the same stats as the other five, however they have access to all of the dark versions of Ultimate Persona spells, making them more difficult to deal with. It's very likely these were meant to be faced after defeating five of them or possibly used for testing.

There's three pieces of the boss called Devil Joker. All of these pieces have their own unique spell set, including two spells that you never see in the game due to the boss being not being seen as the rumor to trigger them goes unused. Also, due to all pieces not in their correct battle scenario similar to Great Father, the sprite will be invisible and will softlock the game if they attack. 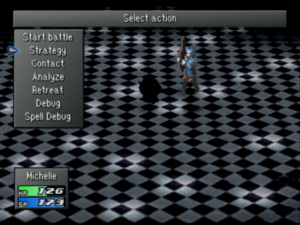 There's an unused enemy named "R", which has the sprite of Jack Frost but fully black. Its level and stats are all at 1, has no spells, can be easily defeated with one hit, and drops no EXP or items. 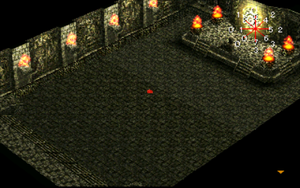 The time room has an earlier version seen in debug mode, with a statue in place. 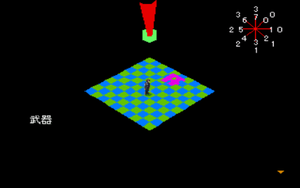 A test room to test sprites and animations.

There's a large amount of spells that never get used at all, though some were repurposed for Persona 2: Eternal Punishment.

A debug leftover to configure battles. The menu itself is invisible due to being removed, however it still retains most of the functionality.

Picking this one leads to four options.

This code will enable the leftover debug battle functionality: 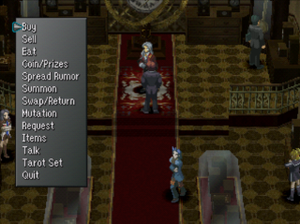 Using the following Action Replay/GameShark codes will replace all shop and Velvet Room menus with a test menu that contains almost every possible shop menu selection at once:

Innocent Sin has some extensive debug features which can be enabled using a patch. The sequel has a mostly identical menu, as well as a leaked pre-release build revealing several additional debug features that were more or less completely removed from both that game and probably also this one.

The below patch will enable the debug features, but will not work with Gemini's translation patch: 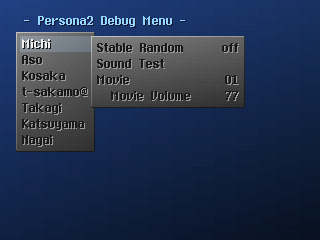 After applying the patch, press Select + Start at nearly any point during the game (starting from the title screen) to access the menu, which has various sub-menus corresponding to the game's multiple programmers. The shoulder buttons can be used to increase/decrease selected values on certain menus.

Along with Eternal Punishment, this game had various debug text removed, causing a couple of the remaining debug features to have much less useful functionality than they used to.

The first menu is named for Michishito Ishizuka, credited as system programmer. 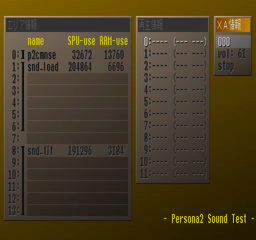 This sound test allows you to play various sounds (primarily voices), view info about memory usage, and more. Select cycles through the on-screen windows, and Start opens a menu allowing you to exit back to the main debug menu (along with a disabled "Load from PC" option).

The second menu is named for Hisakata Aso (window and shop programmer). 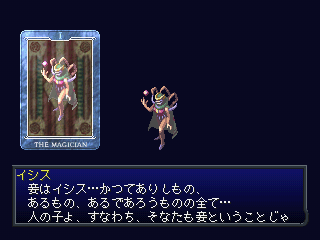 This sprite shows the name, summon message, sprite, and tarot card of a single Persona at a time. You can cycle through them using Up/Down. 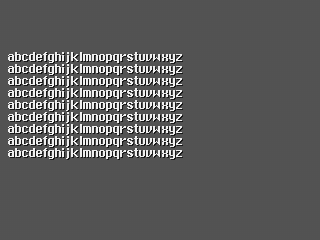 This screen shows the entire alphabet rendered in one of two fonts. 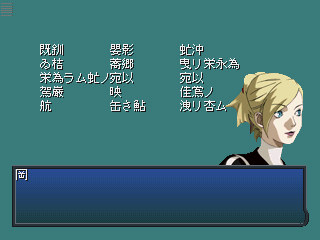 This screen is mainly for testing dialogue boxes, but also shows a list of character names near the top of the screen.

In Eternal Punishment, this screen also draws several miniature text boxes in the background and allows you to cycle through various test messages for the dialogue box. It also shows the unused Lisa portrait as well.

The third menu is named for Yujiro Kosaka, credited as 2D map and command programmer. 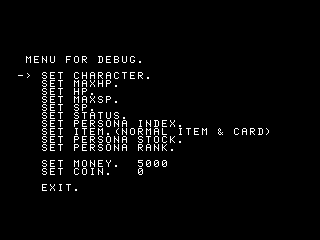 This menu allows you to edit various properties of the currently-loaded game, including money, items, party members, Personas, and more. Oddly, you cannot add certain party members this way (such as Yukino) even though they appear in the party menu.

Strangely enough, this does show what the original party lineup was: Tatsuya, Maya, Eikichi, Ginko, and Jun. The final lineup is Tatsuya, Eikchi, Ginko, Maya, and Jun.

But what's most strangely is that Yukino is the 6th party member according to this, rather than it being Jun.

The fourth menu is named for Takumi Sakamoto (event programmer) and contains these options: 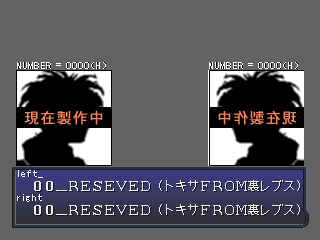 This screen shows two character portraits facing each other and allows you to cycle through them using the D-Pad (for the left side) and face buttons (for the right side). Pressing Select inverts the colors on both currently-displayed portraits, while pressing Start returns to the debug menu.

The default image on both sides is a dummy/placeholder image of a character from Shin Megami Tensei: Soul Hackers, which appears several times throughout the selection of images. 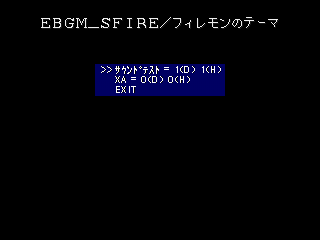 This is another sound test screen, this one much simpler than the other and primarily focused on playing music. The "XA" option also allows you to play voice clips. 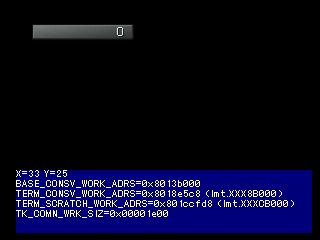 This screen shows a small window with the number 0, allowing you to freely position it on-screen and showing its coordinates and various memory-related statistics. 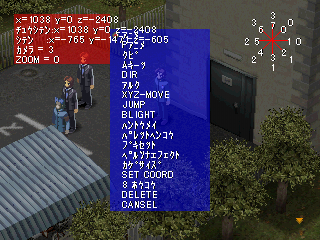 The unit viewer allows you to basically create a mockup battle scene with a specific environment/background. Controls:

After selecting a character, pressing X/O brings up a list for what to do with it. You can bring another character in the map by moving the red circle from the other character.

1. Just lets you bring up another character.

3. Leads to a completely short list of itself. All of these basically turns the head on some characters. The rest will crash the game.

4. Basically turns the characters around if you desire.

5. Use L2 and R2 to turn the characters around.

6. Leads to a different short list. With this, you can make the character run or walk by pressing the red cursor on something. Imagine moving around by clicking.

8. You can make the character jump to an area by moving the cursor over.

9. Changes the lighting on the character.

11. Change colors on the character.

13. You can make the sprites have the glow aura that Personas have.

14. Increases the shadow behind their feet.

15. Shows a graph for the area models.

16. Shows a complete list of animations the characters can do.

The fifth menu, named for lead and dungeon programmer Hidetoshi Takagi, contains only the option "GO! Dungeon" which, predictably, allows you to warp to a dungeon of your choosing. This doesn't quite work as intended, though, always placing you out-of-bounds.

A small, empty test map based on Seven Sisters HS (but much smaller and with no NPCs) is available as option 27, but is not usable from this menu for the same reason as the others.

Despite looking like it works, it does not at all. Seemly no matter what you do, you cannot change the enemies (which are the ones you see from the game), nor able to change the music and see the contact options. Attempting to use this without confirming the protagonist name at the name selection will crash the game if you select your Persona. Attempting to load a save file and then going into the battle options either has nothing appear on the battle background, or hard crashes the game.

The seventh and last menu, named for casino programmer Yasuaki Nagai, allows you to go to one of the casino games. You may wish to give yourself some coins with the Set Parameter menu in order to make the games actually playable.