Persona 5 Royal is the enhanced re-release of a Persona 4 spin-off game. Don't let the title fool you too.

NOTE: This version has some unused leftovers from the original release. This page and its subpages will only cover material exclusive to this version.

Royal has 299 traits and only 96 of them are used; Rest are RESERVE. 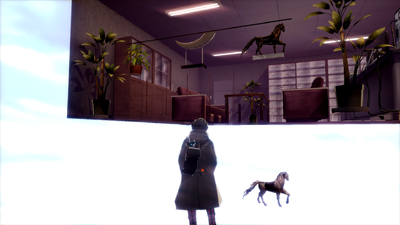 A duplicate horse statue can be found under the room in one of Maruki's flashback scenes.

There is a non-functional hidden door in the Test Track room of Maruki's Palace, which may have been from an earlier revision of the area.

There is a hidden small storage room in the Kichioji jazz club, where it is never seen in view. It seems to look a bit unfinished, and may have intended to be seen from the right side.

The old room from Futaba's Palace, which was replaced by a Will Seed room, exists under it. 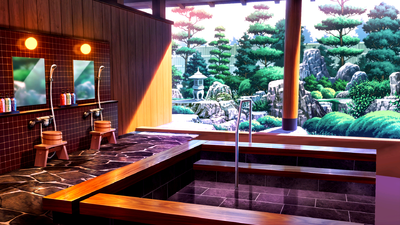 File: f012_031. A museum location. This is actually used in a unused cutscene about Madarame's past.

File: f062_190. A piece of a palace field that's a mostly texture-less limousine. Might be related to this early cutscene of Joker, Kasumi, and Akechi entering the auditorium.

The unused areas from Kamoshida's Palace from the original with the exception of the Sewer Area (finally used and redesigned) and the Early Main Hall are still here, still unused; As well as the placeholder room and placeholder safe rooms. The unused station field is now empty, with only a skybox. 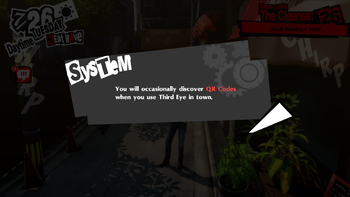 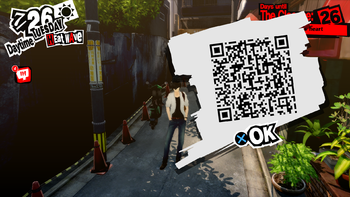 There exists an unused QR code search/display function. It would display a QR code for the use of the now-defunct smartphone app Persona O.A. On its own, it softlocks if executed due to a folder it is looking for that has since been deleted - field/qr/ - and field (overworld) data associated with it.

If executed with the correct parameters (via modding), it would display a display box with a image of a QR code and pressing the OK prompt exits it out.

There are two unused DLC item packs which do not give anything if triggered. The text is dummied out with "RESERVE" in international releases.

There exists unused data for DLC Personas Psyche, Psyche Picaro, Orpheus Telos, Orpheus Telos Picaro, and Neo Arsene Picaro. More info on them can be found on this page.

Outfit name and attached accessory Moonlight Phones are set, but the outfit is just everyone's Phantom Thief attire, likely as placeholder. It also has a DressTalk conversation, but it's blanked out as "RESERVE".

Unknown what this would be, as it never got as far as using everyone's Phantom Thief attire as a placeholder.

Kasumi (Sumire) actually has animations and behaviors for the hideout on the second floor of LeBlanc, which is never seen because by the time she joins your party your hideout is moved to the first floor of LeBlanc, and the Hideout does not change after that. She may have intended to be a temporary party member early on before eventually joining for the third semester, which might've been scrapped, along with the original Will Seeds' purpose due to Atlus' past experiences of receiving a lot of backlash about added or changed things to the original story from the previous re-releases of Persona games and they don't want the same thing to happen for 5 Royal.

Kasumi (Sumire) is internally named Uzuki in some places, like in her battle sprites, all-out attack data, and some confidant data. In two unused attacks, she's named Ikumi and Yayoi (latter blanked out in the international release).

Her codename was originally Clown, according to weapon.pak and Morgana's unused navigator lines for her.

All her unused animations are derived from Ann's, likely as placeholders.

Sumire's leotard in the bad ending credits is pink, while in the Thieves Den gallery, as full picture inserts, puts it as blue. This error (or correction, as Sumire's leotard is blue in all of its appearances) is only in the international releases; the Japanese release keeps the pink leotard.

The portraits of the main characters are redrawn in Royal, but in a few scenes, the original portraits show up.

The texture files for the P3 and P4 Hero fought in DLC Velvet Room battles have textures for Ryuji's Persona Q2 costume.

When discussing with Lavenza about Maruki's Actualization, one flashback shot taking place in Maruki's Palace is different from what actually happened, seemingly from an earlier version of this area.

And while in another scene, when talking to human Morgana if he's happy with his wish, the same happens.

Viewing Ann/Morgana's Showtime from Thieves Den, a mouse cursor is shown around the top left corner. 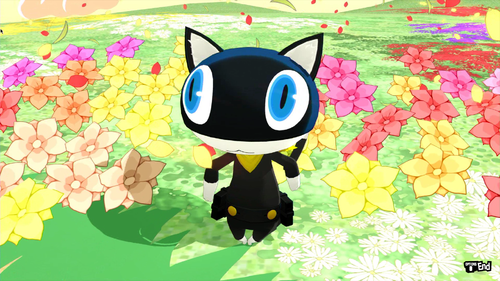 Like previously, Ryuji's shoes have the rising sun symbol removed in the Chinese and Korean versions, due to its association with Japanese imperialism, but also the icon for almighty skills.

In some translated versions, two conversations between the protagonist and some male friends and some stereotypical gay men in were changed as to remove the implications that they were flirting with them.

The opening image for the game is colored silver in the western releases while it is gold with slightly enlarged text and correct punctuation in the Japanese, Chinese, and Korean versions. The sparkles are also positioned differently.

The save data icon is a rough sketch of Joker in the Japanese, Chinese, and Korean versions, while the west uses a (finished) piece of him. 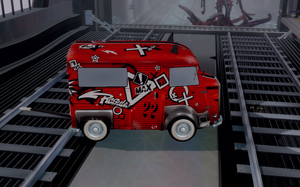 This DLC was only released in Japan and Asia if it was pre-ordered from the Playstation Store, and is unavailable to be obtained in the western release.

For the west, upon certain achievements being obtained while playing the game (the ones for each palace and one for obtaining all achievements), an email would've gone out rewarding you with Themes of the Protagonist, all party members, Caroline and Justine, Lavenza, and Dr. Maruki. However, obtaining the emails were spotty at best, meaning that many players were not able to obtain these themes without contacting customer support.