One of the lesser-known titles in the series, Shin Megami Tensei if... uses the same engine as the previous two games. Taking loose inspiration from a 1960s British drama, the game takes place in and around a high school that gets summoned into the Abyss by a bullied student, who naturally becomes the Demon God Emperor of the whole shebang. It's up to the player to court up a demon army and take the fight to him!

So basically, it's Persona 0.

Two different revisions of the game ROM are known to exist. Revision 1 (or "Version 1.1") was burned onto an EPROM which originally contained Kirby Bowl. As a result, unused regions of the ROM are filled with leftover data, code and text from Kirby Bowl, including the text from the debug mode, several chunks of level data, and probably other assorted leftovers.

Utilizing the Pro Action Replay (PAR) code 7E0E2010 allows for the activation of Debug Mode. This will add various debugging-related functions. Just as the engine of if... is very similar to the SMT2 engine, so are the Debug features.

A function is added to the COMP, allowing to operate a Boolean Flag Editor not unlike those found in Shin Megami Tensei and the Majin Tensei games.

Out of the flags that were tested, the flag at CE enables the player to unlock Domain of Envy upon entering Chamber of Seals. The flags from 24 to 2A unlock the gates themselves.

RAM Check also contains a plethora of additional functions. Depending on which button is held down on Controller 2 whilst selecting RAM Check in the menu with Controller 1, different functions are accessed:

Alignment and Other Data Display

The character's alignment is displayed in hexadecimal under the Moon Phase. Default value when starting up the game is 80. It is not determined what the two digits after the alignment value mean. Below this are two six-digit sets of hexadecimal numbers, one for the protagonist and one for the partner. These are exact hexadecimal outputs of the Guardian gauge of both characters.

If the L or R buttons are held down while a turn of combat starts, all enemies are immediately wiped out.

While in Debug Mode, the Protagonist cannot be killed by loss of HP; his HP will return to their maximum amount the moment they hit 0. However, instant-death attacks like Mudo still work.

In a 3D Map, using Controller 2, hold down Start and press L or R to cycle through the various background styles for these areas (presets of walls, floors and ceilings).

Several hexadecimal numbers are displayed during battle at the bottom of the display window, relating to damage calculation. Damage calculated may differ from what is displayed in the text box, as an attack never deals more damage than the target has HP, in spite of the calculations.

Additionally, a new hidden mechanic is revealed - weapon proficiency. The more kills with a certain weapon, the more likely the proficiency is to rise for the character with the equipped weapon. This has a slight effect on damage dealt. This mechanic is displayed in the Debug Battle information display, as well. 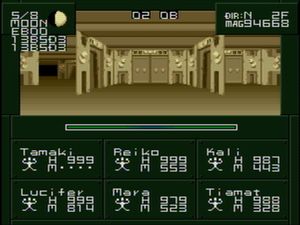 There are parts of the map that are not shown in regular gameplay and therefore are rendered incorrectly. An example of this can be found at 02 0B coordinates, where the game renders one-sided doors in a weird way. Attempting to enter incorrectly-rendered space results in the player visiting the location like they're supposed to in regular play, although from a different side of the door.

Additionally, this menu allows for Battle animation testing. Pressing L or R cycles through the animations, while A plays them. Holding B while cycling through coordinates or animations will move forward by 16 instead of 1. Pressing Start will resume regular gameplay and teleport the player to the selected coordinates. The background music and walls will not change after the player presses Start.

The above Animation Testing has a secondary function. First, select an animation number. It doesn't matter if the animation is being played. Press Start to return to regular play. Now hold Start and press X on Controller 2. This will summon eight demons with the same ID as the number you selected.

You can also spawn two enemy groups of one each. Select an animation number as above. Then press X on Controller 1 to activate two-enemy-group-mode (confirmation sound is heard). Now if you select a second demon ID from the animation list and press Start, then press Start and X on Controller 2, you'll be faced with two demons at once.

You can resume single-enemy-mode from these test-spawns by pressing X on Controller 1 again while selecting animations. You will hear the cancel sound effect as way of confirmation.

Everything past 0134 bears a potential for bugs as the enemy demon index does not reach to this point, but the animation index does. Thus, Glitch demons might occur. (And thus, you might run into nonsense as demons bearing names for themselves and their species derived from the item, spell or conversation indices. Many of these glitch demons utilize sprites for Sword Fusion and can potentially break the sound engine or the running game itself.)

You can cancel the Level Up screen by pressing Start without distributing any points.

Press the Automap-button (default L) on Controller 2 to change the Moon Phase to the next step. This function has such high priority, for some reason, that it works even when doing ANYTHING else, including while activating the Partner Choser or Gem Adder functions or changing backgrounds, all functions that require the L button by default.

When a human character is dead and in the process of receiving a new Guardian, hold A on Controller 2. The Guardian will 100% be one of the rare Fiend-type Guardians. This works on both the Protagonist and the partner, even though in regular gameplay, the rare Guardians are restricted to the Protagonist and even then, only on a Full Moon with a 1-in-256 chance of it even happening at all.

Likely an unintended "function", when pressing Start and Down on Controller 2, a sound like continuously scrolling through an unseen menu is heard. Next time the Partner's name is drawn on-screen, it will come out as jumbled nonsense like Dodogogozozo (ドドゴゴゾゾ).

A seemingly unused music track which transitions into the "demon appears" theme can be found using the above-mentioned Sound Test, numbered A7.