Devil Children 2 - Honoo no Sho/Koori no Sho (or Devil Children: Book of Fire/Book of Ice in English). Much like the first game, Akira and Jin return on a typically MegaTen-y adventure to the lands of Fire and Ice in order to re-rescue their friends.

There were a number of differences from the previous pair of games (DemiKids), such as new locations, 81 additional demons, and slight differences with the battle system. Incidentally, these 2 games were probably Multimedia Intelligence Transfer's final retail release. 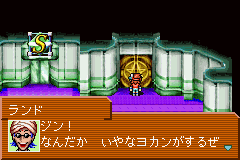 This portrait is often used when displaying dialogues that shouldn't be seen. For example, when attempting to visit locked off areas with Gale or Rand speaking, but only if they aren't already in the party. 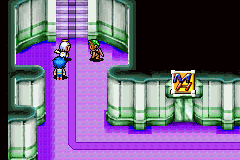 This image shows the NPCs in the default state that correspond to another mapped event. If they are spoken to, Akira walks off the map, and is warped to another map entirely.

This type of event happens for Light and Dark as well as for Fire and Ice.