Persona 3 is the fourth installment in the Persona series (part of the larger Megami Tensei series) and the first to be on the PlayStation 2. 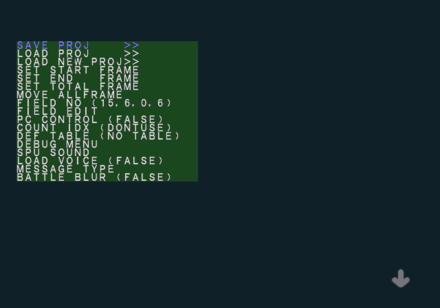 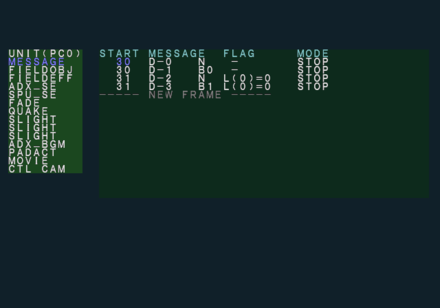 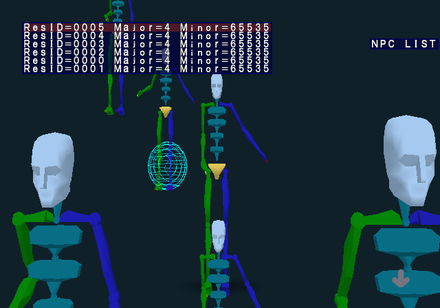 A fairly elaborate debug menu remains in this game. You can make your own cutscenes, apply sound effects and BGM, apply graphics to appear during cutscenes, and toggle various settings in this menu. To enable it, apply the code below for your version of the game.

The file must be named 94A82AAA.pnach, and placed within PCSX2's user-related cheat directory. This is typically located at C:\Users\<USERNAME>\Documents\PCSX2\cheats.

With the above code active, enter New Game or enter any area with a cutscene. When the cutscene is playing, or in New Game, press R2. This will take you to the debug menu. Pressing Triangle while in this menu will send you to the cutscene editor window. Pressing Circle will exit out of an option. 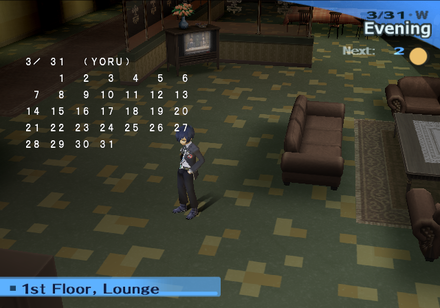 An example of this debug menu in-game.

While in-game, set this address 211672E0 to 1 to open a debug menu that allows you to force what state of day you're in as well as to change the current date. 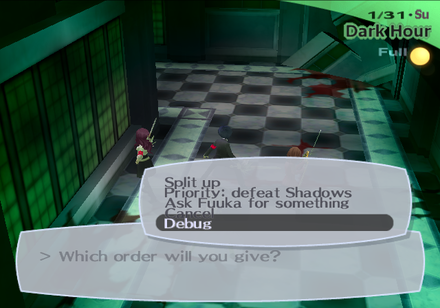 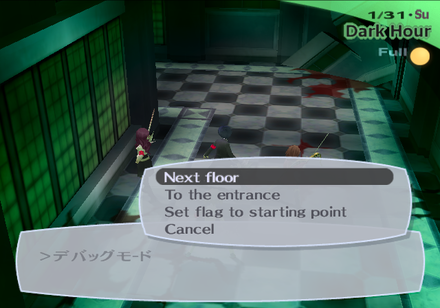 By using this code, you can add a little debug option in the navigator menu allowing you to change floors or go back to the entrance at will. 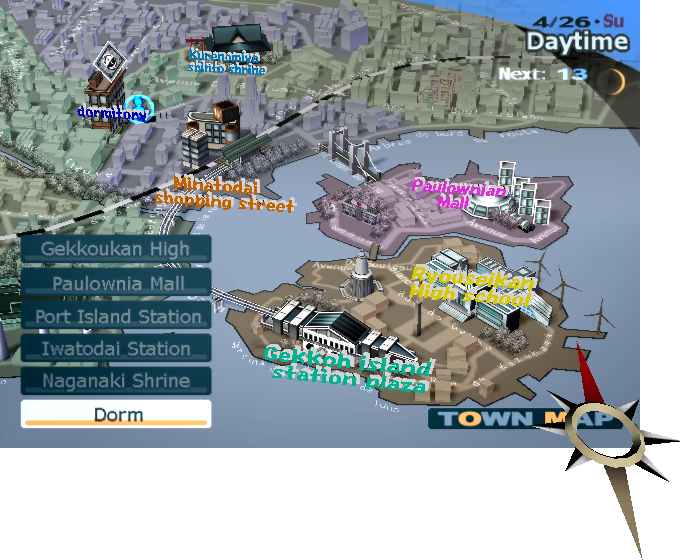 A set of early map location names remain in the files. Rather than text strings, these names are 2D models contained in data.cvm/FIELD/RMD/M001_003.RMD. The names are accompanied by a compass model, and their placement fit the final game's map quite well. A render of the names superimposed on the map can be seen above. A list of early and final names are listed below for reference. 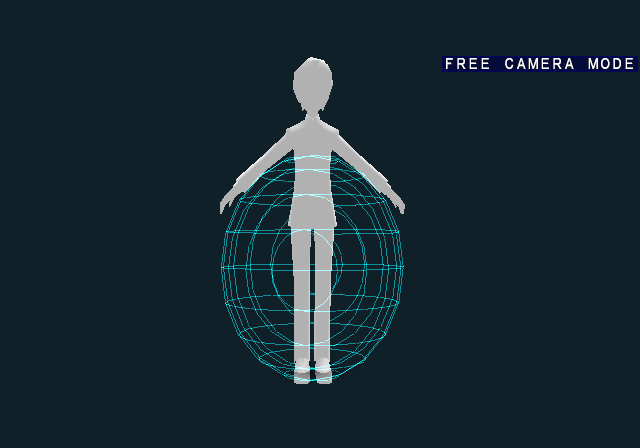 An unused placeholder model which can be found in an unused cutscene. 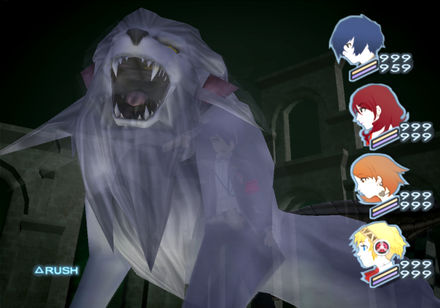 By setting your battle Persona to any of Fuuka's Personas, it will show this Cerberus model in battle instead. This is probably because her models are only shown in cutscenes and are not meant to be used in battle, so rather than making battle animations for them the developers just re-used the Cerberus model from Shin Megami Tensei III: Nocturne as a placeholder instead. This model isn't used anywhere else in-game due to Koromaru's Persona being a different version of Cerberus, more similar to the one from Digital Devil Saga.

If you want to test this for yourself, use one of these codes to put either Lucia or Juno in your Persona menu.

FOBJ004.RMD, located in data > FIELD > GRMD with other interactable Tartarus objects. Its purpose was most likely to fully heal the party, as the texture included is called "heal_a001_01". This device was likely scrapped in favor of the Tartarus lobby automatically healing the player and party.

61.ADX is what appears to be a fanfare track from an unknown game. It sounds very similar to the level-up theme from Digital Devil Saga.

There are three early versions of The Voice Someone Calls (Tartarus Entrance theme), named 82.ADX, 83.ADX, and 84.ADX.

An early version of Master of Tartarus appears twice, as 0601.ADX and BBGM03.ADX. There is also a third copy named 0602.ADX, which is missing the first two seconds of the song.

THEME.ADX is an early and (mostly) instrumental rendition of Burn My Dread.

By using the cutscene editor, you can access some unused cutscenes. Some are still in Japanese, while others are entirely voiced in English.

An unused cutscene of the main character being introduced to his class. It's left entirely in Japanese.

An unused cutscene with Yukari at the dorm after the protagonist recovers from his Persona awakening. According to the sound files, this scene should come before the previous one, but it comes afterwards in the files. There are similar oddities in the ordering of sound archives in the early portions of the game.

An unused scene at school, before Junpei joins the team.

An unused scene with Yukari, before Akihiko returns to the dorm.

This cutscene is present in the final game, but the line "How marvelous! I cannot believe the moment has finally arrived!" is unused. It was later re-added in Persona 3 Portable.

An untranslated, unfinished reversal for the Hanged Man social link.

An untranslated, unfinished reversal for the Moon social link.

An alternate version of one of Yukari's lines when you are first asked to join SEES. In the final game, Yukari instead says "Oh! There you are!".

This was supposed to be said at the very end of the game, but it goes unused because the final cutscene interrupts it. In said cutscene, she says "Don't worry. I will always be by your side, protecting you," instead of this. This was later re-implemented in Persona 3 Portable, replacing the line from the cutscene in the original game, though only as a voice line with no text.

This text corresponds to the area with the Priestess boss during the first Full Moon Operation. However, since the room is used only for cutscenes, the text never gets a chance to be seen without using cheats.

This is a placeholder line for when an area in the game doesn't have any sort of text. It can only be seen by using cheats.

There are a few leftover batch files in various parts of the game:

Several enemies have code that is inaccessible as a result of oversights, or is outright unused:

The following AI is accessible in theory, but is highly improbable in practice due to specific circumstances: