Bionicle Nestlé is an expanded edition of the Bionicle CD-ROM that was packaged with the original line of sets and given out during promotions. As the name suggests, this altered version was available in Nestlé cereal boxes.

xprobio.mov, stored in the \MOV folder of the disc, was intended to play after completing the six demo missions. While it is used, it horribly glitches and as a result is nearly unwatchable.

Interestingly, it is the only video which does not have a renamed copy in the LEGO Software\Products\Bionicle Nestlé\MOV folder and the only one which isn't copied during the installation process.

We can manually start the level we want executing nestle_game.exe with the following arguments in a CMD:

This screen can be seen trying to access a non-existing level with level selector.

The program is completely copied to the hard drive when installing, making this screen unused. 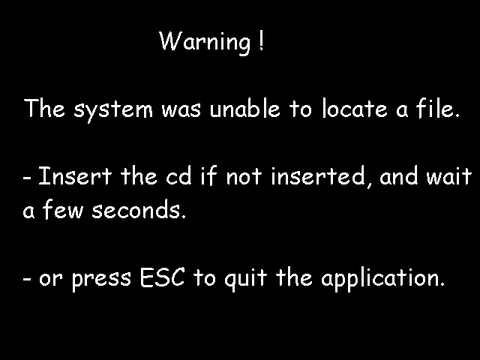 There's an unused routine that displays the development credits on the screen in the platform game. It's made of 3 test al,al machine instructions followed by a je (jump if equal) instruction. We can enable it by changing these je instructions at 0x237DD, 0x237C5, 0x237AD with jne in nestle_game.exe. 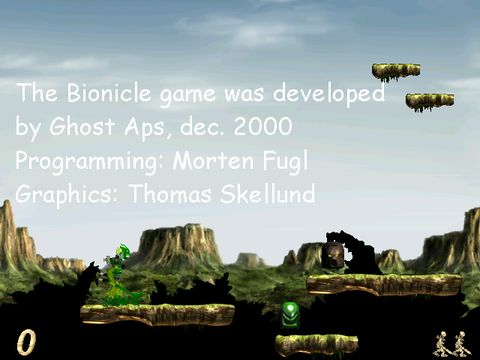 Ghost is the studio that produced the animations on the CD. It seems Fugl and Skellund may also have been doing work on games at Interactive Television Entertainment during this time period, perhaps this is what qualified them to work on this platform game part of the disc.

Note that the default high-scores have MOF with 100 points at first place, followed by THS with 50 points at second place.

There's a logging functionality that was used during development and wasn't disabled in the executable. It needs nestle_game.exe to be run as administrator, and it logs messages into a log.txt file. These messages are very simple by default.
nestle_game.exe accepts up to 3 numerical arguments. The 2 first arguments are logged into log.txt, being the first the level selection previously mentioned. The purpose of the second argument is unknown.
A third argument can also be passed, if it's different from 0, it will enable advanced DirectDraw log messages.

Some unused strings can be found in nestle_game.exe.

The game reads game files with internal decoders. These decoders have lots of message strings. Here are some of their leftover copyright strings.

There are references to some source code files and directories for the logging feature. Examples: