The PlayStation version of LEGO Island 2: The Brickster's Revenge is very watered-down compared to the Windows iteration, with many things reworked and even more things dropped or greatly simplified - including whole levels. 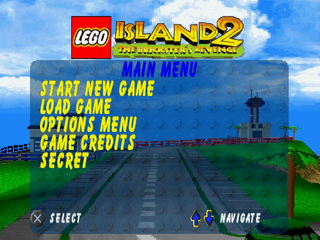 There is a byte in memory that defines how many options are visible on the main menu. Increasing it by 1 reveals a hidden option titled "Secret", which takes you to a Level Select screen. It's possible that there is a cheat code to enable it, but if there is, it hasn't been found yet.

Of note, this screen lists several mini-games cut from this port. Selecting one will display a "Subgame not selectable" message. Indeed, all of the appropriate files are missing from the game's disc entirely.

The unselectable level and state names are below. They are internally written with underscores, but displayed on-screen with spaces.

Strings with asterisks (*) are too long to be fully displayed on-screen, with the cut-off text shown here in bold.

PADDING.BIN in the NTSC version contains the ending video at a higher bitrate and framerate than the used one.

The PC version dynamically switches the track playing depending on context, such as while next to certain buildings. Other times, this is done simply to iterate through variations on a track.

Most of these instances are not present in the PlayStation version, but much of the music was converted over anyway, only to go unused. There are also tracks that are unused in both versions of the game. 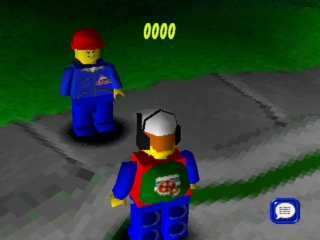 Bill Ding is spawned in on Lego Island at all times, but is set not to be visible. If hacked to become visible, he shows up on a curb behind the Pizzeria. He has no behavior or collision, and cannot be talked to.

If another character's behavior is placed on him, you can talk to him. He has no dialogue, but has a talking facial animation and is fully rigged to walk around the island. One of his hands is missing, indicating a scrapped minifig tool that he should be holding.

In the PC version, Bill Ding appears anytime a building is constructed/reconstructed, such as by retrieving a Constructopedia page.

Among the models listed in memory for the Board Park are four Lego Island characters. The model names are DJAB , BONE , VALS , and PAPA. Excluding BONE, they highly likely refer to DJ Jackitt, Valerie Stubbins, and Papa Brickolini respectively. As for BONE, this seems to refer to a character that would become Gnarly Bones in the sequel, Island Extreme Stunts, but was scrapped from this port. He can still be seen in the center of the quarterpipes in the image for the board park on Pepper's computer. These four models are placed two on either side of the top of each quarter pipe, but their models don't seem to draw anything, even when another visible object's model is set to their IDs.

A number of menu graphics, many of which seem closer to the PC version of the game, go unused. Many, if not all, of these files are seemingly loaded while on the title screen, but are never used in a final menu.

There are smaller versions of these icons too, as well as identical duplicates for the same sizes in the same folders. Welcome to the file structure that is LEGO Island 2.

Apparently an early logo for the title screen. It's unknown why only half of the image survived and why the palette seems incorrect, but it displays the same way when hacked back into the final game's title screen.

Unused HUD icons for Adventure Island. The blue bar is not used anywhere in the game, even when there actually is a progress bar on the side of the HUD.

Duplicates of these files are also found in the Castle Island HUD archive, also unused.

Presumably for an animation, as the container is called INFOANIM.TBK. It doesn't show up inside the Infomation Center.

This is very similar to a used version without the greenish tint stored in WALLS.TBK, where most of the Infomation Center's rack-mounted consoles live. For that version, the fade occurs when you access the database. There is an additional fully-black frame, but since it's literally nothing they haven't been uploaded.

An extra frame for the minimap arrow. The used one has a red outline, so it was probably intended to alternate flash with this one.

The final game uses a yellow brick from a different archive for the HUD icon.

A blue texture for the centrifuge timing lamps. The blue lamp models are actually loaded at runtime, but there doesn't seem to be any functionality in the minigame to cause it to appear. As a side note, there seems to be separate models loaded in memory for every lamp state. Per side. That means four each side for a total of eight models. The blue lamp models are, therefore, unused too.

It gets better, as there are also eight more models for 1×1 green studs, similar to the ones on the centrifuge base model, which may have been earlier indicator lamps. The first four are regular green, and the other four are a very marginal slightly brighter green.

A 2D asteroid (the final uses only 3D models for asteroids) and an unknown warning bubble that are unused in Asteroid Belt. They are stored alongside the graphic used for the 2D stars that fly by, so the 2D asteroid might have presumably flown past as well.

Unknown arrows stored alongside the rest of the minigame's particle effects.

This strange image is stored randomly with an assortment of other Hates Camp textures.

The camera angle makes it impossible to see the sky in Hates Camp, but it does apparently have textures. Considering there are other leftover textures from Lego Island in the "HAT" folder, and that the minigame seems to have some of the other island's wrapping behavior, Hates Camp may have started out as a copy of Lego Island.

Files found within, or around, the PSXFILE.

Many debugging strings are loaded while on the title screen and while in other levels, some generic, and some containing jokes towards developers.

Remember to give Paul some toast!

"loaded overlay %s", "commentry file %s initialised ok", and "commentry header file %s initialised ok, %d phrases available" have been observed as functional and are output to the TTY console, but are otherwise not visible during normal play. The first one outputs the filename of the binary overlay for that given level. The second outputs the name of the audio archive chosen, which contains each character's voice lines. The third and final one outputs the filename for the associated header file, then the total available individual voice lines listed within it.

A working example when loading into Lego Island from a new game would be: