After Indiana Jones' first LEGO Adventure it was decided to make a sequel called LEGO Indiana Jones 2: The Adventure Continues which was released on several platforms including the Nintendo DS.

Use the following Action Replay code and press Start + Select on the title screen to load another menu which allows you to access the debug menus. This works in all versions of the game. 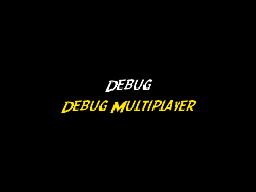 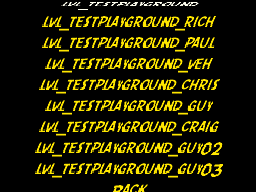 A bunch of test levels. Different than in other LEGO games for the Nintendo DS most of them can be played without getting the error that the cartridge was removed. Because the maps have names in their title it's likely that some programmers had their own test maps.

A test map for different kinds of event triggers like switches, levers and pushable boxes. There is also a non-working teleporter entrance and a boss enemy test. Loading the boss enemy can cause crashes rarely.

The map layout is copied for almost all other test maps.

A map which can't be loaded via the debug menu. Loading it causes the game to crash with the error "The DS Card has been removed."

This could have been the test map of Richard Smith, one of the programmers of the game.

This map copies many objects from LVL_TESTPLAYGROUND, some objects however were replaced with others. Objects the player can interact with were added including traps and destroyable objects. Entering the left side of the level causes the game to open a nonexistent menu which can't be closed.

This could have been the test map of Paul Marshall, the lead programmer.

Another map which can't be loaded via the debug menu. Loading it also causes the game to crash with the error "The DS Card has been removed."

It's unknown who's test map this could have been. It's possible that VEH is just the abbreviation of vehicle and this was just another map to test them.

A map for testing more interactable objects including objects to test abilities of skull-characters, whip-characters and climbing. Furthermore, a text trigger can be found, two pushable teleporters which allows you to teleport within the map and several different types of levers which instantly deactivate themselves after activating.

This could have been the test map of Chris Russell, one of the programmers of the game.

A pretty empty map compared to the previous ones. This map includes an enemy spawner which can be activated and deactivated and a bunch of collectibles. The map has a teleporter right at the start with the info "This way to M02". It teleports to LVL_TESTPLAYGROUND_GUY02 allowing the player to keep their collectibles they collected within the map.

It's unknown who's map this could have been. Based on the credits no person called Guy was working on the game.

This map seems like a small testing area for vehicles. The player starts in a jeb with Indiana Jones as the character. The vehicle can't be moved at all and it's not possible to exit the car with Jones. However, changing the character will cause falling out of the car and makes walking around possible. Changing back to Indiana Jones doesn't allow to control him, he can't be moved at all and also has no gravity causing him to float when changing to him in air. The camera is stuck so exploring is not really possible.

This could have been the test map of Craig Richardson, one of the programmers of the game.

Another copy of LVL_TESTPLAYGROUND_GUY, the same collectibles were removed as in the previous map, however an additional artifacts piece was added to allow collecting all 10. The teleporter is labeled with "This way to exit M". When using it the game shows the result screen as when a normal level was beaten. Afterwards the player can either continue the story which sends them to the first level or they can exit back to the island.

Cheats takes you to this screen where most of the cheats are self-explanatory. "LOADSAMONEY" gives you 100,000,000 studs, and "Skip Activation" disables the minigames for the Activation panels, allowing you to activate them instantly.

Like some other LEGO Nintendo DS games this one has button combination cheats as well which were supposed to be useable in the main menu. However, for some reason the game does not keep track of buttons pressed in the main menu which makes inputting them impossible. Using them would have affected the save loaded afterwards. Codes and their effects are taken from the game memory itself.