LEGO Rock Raiders is a real-time strategy game about a team of space explorers who, being only three days from returning from Earth, got pulled through an asteroid field into a wormhole. They found themselves, drained and damaged, orbiting a mysterious planet rich in Energy Crystals (needed to power the LMS Explorer), Ore (needed to repair the LMS Explorer), and strange lifeforms (not needed at all). Using oversized drills and powerful equipment, the Rock Raiders exploited this planet for their survival.

It was also terribly rushed and revised many times, so a good 30 MB of the 80 MB of data for this game is unused.

Three enemies have configuration code and object files left unused in the game.

A very low-polygon enemy composed mostly of flat sheets, resembling a very scaled-up version of the used Small Spider. There are only three animations for it: standing, walking and an incomplete spitting animation. It appears it was supposed to crawl around and shoot webs. While it can be re-activated, the spit model is corrupted, and the function to form webs was never coded in. Its concept was used in the PlayStation Rock Raiders game, though it was more realistic-looking than either of the spiders from the Windows PC game, and it could bite Rock Raiders.

A two-polygon surface with a .bmp file of a snake crawling. It greatly resembles the snakes that appear in several of the game's pre-rendered cutscenes. What it would do had it been used is unknown. 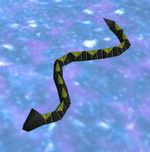 A higher-polygon version of the VLP Snake contained in the same folder, with grey and white markings instead of blue and green. The animations for this creature are glitchy, as the game can't decide if the center of the model is in the head or the actual center of the body. It has an eye texture that doesn't seem to be used, leaving it with a featureless head. In addition to the non-VLP versions of the normal snake's animation, there are also two other animations, snakey and mar-snake, which both give the snake an absurdly wide head and narrow body.

A small red scorpion that may have pinched Rock Raiders, had multiple "I'm being attacked" animations been coded in for the Rock Raider. This one actually appears in early images, meaning it was working. Additionally, Scorpions were used in the PlayStation game; in fact, their sprites appear to be this same model as viewed from above. Interestingly, Slimy Slugs have a commented out CanScareScorpion line in their configuration code. 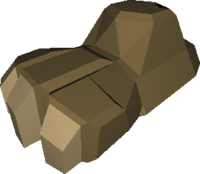 A more realistic (albeit untextured) Rock Monster foot, saved as LeftFoot. The design of this foot fits how the Rock Monster had been designed in the sets. Presumably cut early in favor of a lower-polygon model. 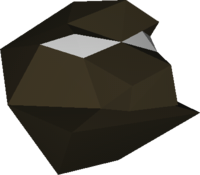 A poorly-designed head, saved as simply Head. It was replaced by a more realistic head and an independently-moving jaw. 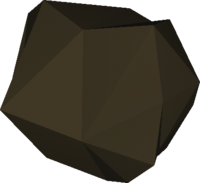 A bizarre file in the Rock Monster folder. There are no traces in the animations telling what it could be. The name presumably is short for "delete me", so the artists probably meant to remove it, but never got around to it. Upon closer inspection and examining a real LEGO Rock Monster, it appears to be the forearm. 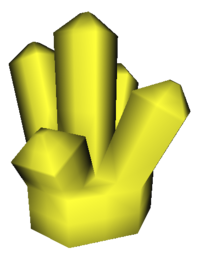 A very high polygon Energy Crystal model, saved as Crystal in both the Shared folder and the folder for the standard Rock Raider. This model closely resembles actual Energy Crystals as seen in the pre-rendered cutscenes and the LEGO sets, and it has an unnecessarily high 688 polygons. It was presumably cut for performance issues. 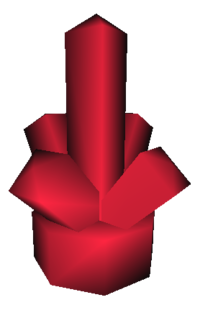 There are a lot of unused interface graphics from old designs or that were cut out to simplify the game. There are also a fair number of unused model textures.

There is a single file in the Rock Raider folder for the pattern of Jet's leg. There was also a 1999 advert that showed several in-game Rock Raiders that were copies of Jet. 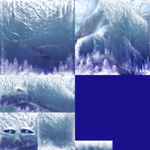 The Ice Monster has a second texture set that is identical to its current one, except merged into a single file, like the Lava Monster. For some reason, the developers switched it to separate files, like the Rock Monster. 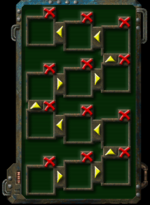 A version of the priorities panel with twelve icon slots instead of the nine used in-game. It also lacks a reset button.

These two info panel images are variations of the "a new cavern has been discovered" notification, likely intended for ice and lava caverns; however, the rock cavern image is used universally.

The game has a lot of unused voices and sounds, most of which are stored in the Newsfx folder.

There is a large amount of unused text in the game files.

There are four files in LegoRR0.wad/Information/Encyclopaedia/ that hint at a planned in-game help system.

There is a file (LegoRR0.wad/Information/Help/EditorHelp.txt) with instructions on how to use the (non-existent) level editor; presumably this was a planned or internal feature that was removed in the public release.

Open LegoRR1.wad with a hex editor and find "AllowDebugKeys". There, change the nearby FALSE to TRUE followed with a hex value of 09 and save the modified .wad file. Alternatively, create a shortcut to the game's .exe and add the parameter -programmer to the end of the target path. Then, the player should be able to access many debug keys in the game.

The game was rereleased in the early 2000s, with only two major changes: