This page details one or more prototype versions of LEGO Island 2: The Brickster's Revenge (PlayStation). 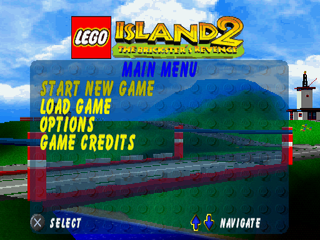 A presumably late prototype that somehow made its way onto the internet long ago. Some might have ended up with this version without ever realising it's a prototype, since it was apparently labelled as the final US release.

Many of the files on the disc have identical dates to those in the final game.

Nearly every level with a dedicated textures folder and a large play space contains some duplicates of particular islands texture sets, usually Lego Island or Castle Island. Ogel Island for instance has leftover duplicates from Castle Island that never got replaced with Ogel-specific versions. Because these are just duplicates of used textures, they won't be uploaded or mentioned unless particuarly noteworthy.

Some textures were removed along with the battering ram.

This file is found inside the PSXFILE in the directory /DATA/FRONTEND/LANG. It is not found in the final game.

Several bugs are present in this build that are fixed in the final game.

It is curious to note that while the Brickster's hands are incorrectly both yellow here, they seem to be blue and white as intended through the rest of the prototype.

Its existence alone is the main difference when comparing the island to the final game, since the final did away with all of the PC version's bridges. This last bastion for bridges was swapped out for a landmass in the final game instead, as pictured below. The channel under the bridge would have acted as a nice shortcut to the Castle Island portal and back.

Things noticed during freeroam after the game has been cleared.

Jousted and Raging Bull contain duplicates of these textures in both versions of the game.