Mata Nui Online Game II: The Final Chronicle (commonly abbreviated to MNOG2 or MNOLG2) is the 3rd person followup to MNOG, also released in episodic updates to help build up to (and completely skim over) the finale of the first major arc of the Bionicle line. The following content was found using the most recent fan "restored" version of the game, though the files in which these were found are unchanged from the final official version.

On February 9, 2004 the renovated Bionicle website was published, and the game was removed temporarily. Unfortunately, the files NixiesLibrary.swf and nokamaconversation.swf were accidentally deleted. This rendered the game, already unbeatable without cheats due to other issues, even more broken. Neither file was recovered, and as a result the loss of these files constituted the final (unintentional) revision that was released when the game returned to the site on August 9, 2004. 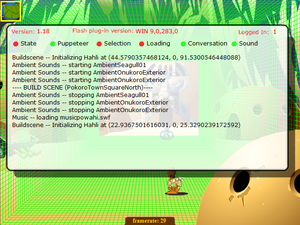 The game has a debug mode left in, triggerable by typing "kapura" as the first key presses after the game is started. Successful activation is confirmed by a framerate counter appearing at the bottom of the screen. At this point, pressing different numbers trigger different things:

0: Toggles the debug output console. It lists the game version, Flash version, and logged-in status at the top of the screen. The console lists the past five minutes of BUILD SCENES and Hahli initializations as well as Backpack interactions, with the following toggleable sub-lists that default to off: State (Focused on game state and save-related functions), Puppeteer (Focusing on moving matoran), Selection (item interactions), Loading (which deals with room/player loads), Conversation (dealing with the new conversation system), and Sound (listing when sounds are spawned/played). Draggable.

'1': Turns off the debug roomshape graphic (see below).

'2': Turns on the debug roomshape graphic, showing a rough 3d box of the intended room shape.

At any time even outside of debug mode, the Tab key can be pressed to cycle through all clickable objects on AND outside the screen, top to bottom and left to right. Shift+Tab scrolls backwards. Current highlighted object is surrounded by a yellow box. Bordered clickable objects (such as the Kolhii Stick, active backpack sub-menu, and unused items) with not allow Tab to move past them unless your mouse is moving when Tab is pressed. When an object is highlighted, pressing Space will activate it (usually what the mouse does). For example, this can be used to cross the broken Ga-Koro bridge without fixing it, and to insta-win or insta-lose Kolhii matches. 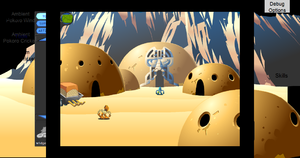 To the right of the game frame (offscreen) is a gray clickable box labeled "Debug Options" (which doesn't seem to do anything when clicked) with the text "Skills" below it. The location of sound objects are shown by their text (for example, "Ambient Pokoro Wind"). To the right, whatever sub-menu you have open has corresponding text ("Tools", "Supplies", "Artifacts") displayed in blue. 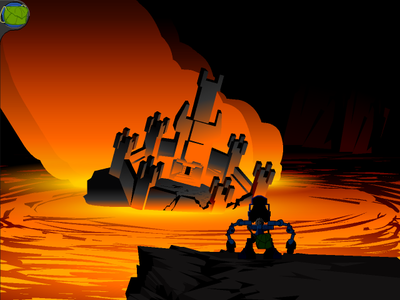 LeTakoroGate2.swf is unused, as it is impossible to return to the main island after Ta-Koro sinks.

Modifying the save to start in the Ga-Koro Kolhii field without accepting a match starts a game with no CPUs, and goals aren't counted. Normally, the match finishes when the timer makes a full rotation, but when started this way, the timer flashes red and stops moving upon completing a rotation and no cutscenes are played.

The game's Flash detection only checks the first digit of the version number, and as a result is only playable (unmodified) with versions 6-9.