LEGO Island 2: The Brickster's Revenge is a rather rushed successor to the popular LEGO Island. This game started as a tie-in to various product lines from LEGO, headed by Krisalis Software. The developers couldn't scrap their work, so noone noticed the main character looked a little like Pepper Roni. Development was then tossed on over to Silicon Dreams, who then tried to hack it into a LEGO Island game, but the project turned out a little too ambitious and it ended up being a case of planning too much without seeing.

The result is a very obviously unpolished game with long load times, hacked together story and gameplay, and voice acting that may very well have been done by the development team themselves. On the plus side, though, this also means it's rife with unused content. 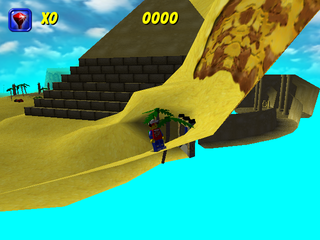 This is an unused area on Adventurers' Island, on the part after Snake Pursuit but before Desert Speedster/Fishing. If you get the camera at the right angle, you can see inside an area by the pyramid. It's a small hallway with four pillars and a coffin at the end. Instead of bothering to remove it altogether, the developers just blocked off the entrance.

Through the glitches shown in the video, you can get inside it, but there is nothing in there. It's unknown what it was going to be used for.

An unused music track found in the game's files called "Town Bridge" plays a short lighthearted introduction, plays all the way through the main theme of LEGO Island, and awkwardly transitions into a strange low-pitched segment. Like the pyramid area, it is unknown what it was going to be used for, and the only bridge that exists in this game is a very small road bridge. Maybe the developers had a bigger bridge planned?

The last segment can be found individually as "TromSolo", but it isn't used either.

An alternate version of pulling out the skateboard, followed by an excerpt from Apocalypse Now: "I love the smell of napalm in the morning!" This is stored in the folder with T-Rex Racing, obviously left in by mistake considering the file name. The video on the right showcases what this sounds like in-game if the existing skateboard sound is replaced with the unused one.

Nearly every single piece of dialogue is subtitled in the game's files, regardless if the dialogue is part of a cutscene or not. This includes all the grunts and all of the minigame banter, which are normally played without subtitles in-game. In most cases, the subtitles are exactly as one would expect, but one particularly noteworthy exception is that in the Snake Pursuit minigame, Johnny's line "Another gem gone!" is bizarrely subtitled "Damn, another gem gone." This never shows up in-game, but it's still quite jarring to see coarse language in a game for children. The reason of this is unknown, even though it's likely due to an angry developer who was going crazy with the subtitles.