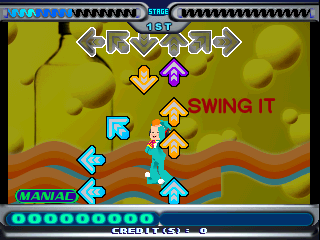 The 6-Panel mode, which was a feature in some versions of Dance Dance Revolution 4thMIX and 4thMIX PLUS, is still in the game's coding, and can be enabled with the following MAME cheat:

Additionally, while most of the new songs load their Single charts as some sort of failproof, the song SWING IT has a complete set of 6-panel charts. Considering the song has graphical data intact in 4thMIX PLUS, this further backs the theory that the song was originally planned to appear in that game.

Between the game's background animation sprites, there are several that are never called by any of the songs' scripts.

blue
f9a_blue.cmt
Of the eight gradient sprites present in this file, only two are ever called, leaving these six unused.

g99_blue.cmt
Contains 12 sprites, 2 of which are never used.

i87_blue.cmt
Contains 20 sprites, one of which is never used.

gren
h97_gren.cmt
Contains 16 sprites, 2 of which are never used.

In GAME.DAT, there are two Konami logos and one Bemani logo that don't appear anywhere in the game. They were possibly used in an early version of the logo sequence.

On the gameplay screen, graphics that display the origin of a song are displayed on the top right to the song's banner. Of the eight new CD titles added in this release, three go unused; those of Dancemania CLUB THE EARTH II, Dancemania SUPER TECHNO and Dancemania WINTERS ROCK GROOVE.

Early assets for the game's entire HUD can be found in GAME.DAT. Differences vary from slight recolors to complete reworks.

Two iterations of an early warning graphic, which covers the entire screen. In the final game, the warning text is displayed inside a box. 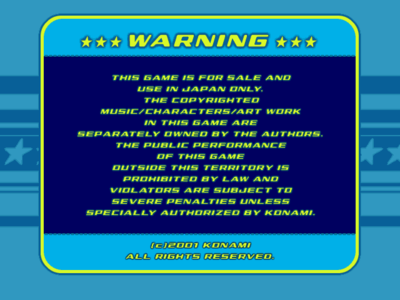 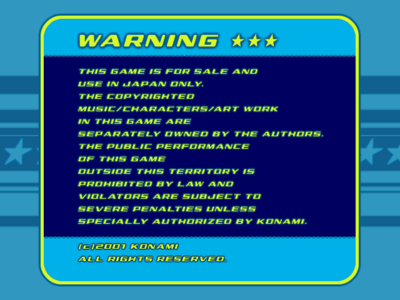 How To Play Sequence

The following unused, slightly overwritten banners can be found in CARD.DAT. They could've been part of an earlier set of graphics for the songs Electro Tuned (the SubS mix), RIGHT NOW, Sana molette ne ente and TRIBAL DANCE (Almighty Mix) as their positions in the file are close to the songs' final graphics.