The game's stepfiles contain two sets of stepcharts; one to be used in regular gameplay, and another to be used in Multi Play.
While the Multi Play mode does not contain the Maniac difficulty, all of the game's songs, save for NONSTOP E, have them, presumably to be used as a failsafe. Curiously, some even have earlier versions of their regular Maniac-difficulty charts stored within this slot.
In addition, all the other NONSTOP songs have their entire second set of charts going completely unused, due to these songs not being available in the Multi Play mode.

All of the download links below is of data converted to be readable by programs such as Stepmania and ArrowVortex.

While most of this chart is completely different from the final Maniac chart, the rhythms in the chorus sections (measures 15 to 22, 31 to 38) are a bit similiar.

The only difference between the failsafe and the used chart is a single Up-Left arrow at measure 61; it is positioned an 8th beat later in the unused variation.

Much like CLUB TROPICANA, this failsafe is a very different version of the song's Maniac chart. The only section that remained mostly the same between both versions is measures 6 to 10.

Both charts are very similiar, though there are still some differences:

The only difference is a single pattern in measure 16, which seems to follow a different hi-hat sequence.

This failsafe is yet another very different version of the song's Maniac chart. While the rhythms are overall similiar, the arrow placements pratically don't match.

While most of the chart is the same, differences can still be found:

This failsafe chart is completely different from the final Maniac chart, and notably uses 16th arrows.

Another mostly different Maniac chart. The section that contains the least differences is the second chorus (measures 30 to 37).

As stated in the table, PARANOIA EVOLUTION's failsafe chart is an early version of the Basic chart rather than Maniac. Differences are noted below:

The song's notable 16th note drill section, which can be found from measures 36 to 37, was not originally there. The 16th note section in measure 44 was also originally one of repeated 8th notes.

Of the other NONSTOP tracks, the only Multi Play set chart that is the same as the final is NONSTOP A Basic. As such, it is not included in the package below.

NOTE: All of these files can be found within the filesystem extractable from GQ894JAA.DAT unless stated otherwise.

Another folder that is just as empty is data\pct256\ta, which only contains the file m_01.cmt. It is an earlier, rather colorful banner design for the song TOGETHER & FOREVER.

m_mlstre.cmt, which can be found in the folder data\pct256\japa, is a mockup graphic for the results screen in the Multi Play mode. 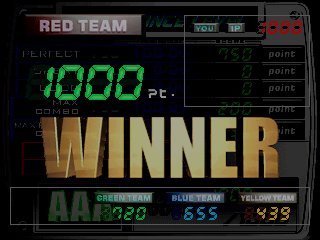 This graphic of Butterfly's CD from Dance Dance Revolution 2ndMIX can be found as an unreferenced file, a bit before where the game's filesystem begins.

Within the game's filesystem is references for different regions, despite the game never being released outside of Japan. These include music database files, as well as folders for UI assets.

As for the music database files, they can be found at data\mdb upon the filesystem extraction, labeled as aa_mdb.bin (Asia), ea_mdb.bin (Europe) and ua_mdb.bin (America). Those three files are the same, and, when compared to ja_mdb.bin (Japan), it is noticeable that they lack several entries: THAT'S THE WAY '98, TOGETHER & FOREVER, GET OFF, and NONSTOP B (which, coincidentally, contains the three aforementioned songs).

As for the folders, they can be found in data\pct256, labeled as engl (English), fren (French), germ (German), ital (Italian) and span (Spanish). Their content, however, is the same as the used japa (Japanese) folder, save for the caution screen graphic, which is mysteriously absent.

The folder sd\data, which can be found upon the filesystem extraction, contains the game's sound effect and announcer files.

A single unused announcer file can be found in out_demo.vab, which also contains the Konami jingle heard in the game's attract sequence and when unlocking the Maniac and Maniac Ultimate modes.

It could have possibly been heard when inserting a credit or in the end of the opening video, as it was the case with the first game, as well as almost all future games in the series.