The game that started the rhythm game craze of the late-90s/early-00s, Dance Dance Revolution introduced to the world the joy of pounding arrows with your feet.

Textures relating to a scrapped background dancer, referred to internally as "boy", can be found in the game's disc.

A standalone image for the Dancemania BASS#1 album, along with a temporary graphic for Dancemania SPEED. It seems both were originally going to be displayed along with the other Dancemania albums, instead of being featured in a background picture.

A "Music From" text graphic which would be presumably displayed above the Dancemania album CD titles in the Song Selection screen.

An unused song, Money, by The Ragga Twins, exists on the game's disc complete with graphics, step data and music. The music data for it can be heard by putting the game's disc in a CD player and listening to tracks 10 and 20. The JAB revision of the game replaced the two tracks with silence, and the Internet Ranking Version completely removes the music from the disc, though the step data and graphics remain. The song was present in the game's location test, but was presumably removed from the game due to licensing issues. A song very similar in style, MAKE IT BETTER, was added in the Internet Ranking Version, and is believed to be a replacement for Money. Its first line, "Got no money..." might be a reference to Money's removal. 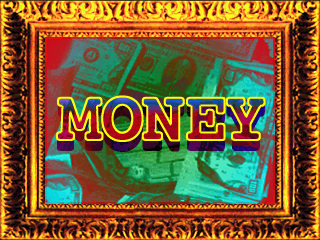 Selection audio for Money, found on track 10 of the game's CD.

The audio for Money, found on track 20 of the game's CD.

Stepdata for Money, converted to .DWI format and compatible with Stepmania (a DDR simulator). To make the song playable, download the other files on this page and remove the "DDR-" at the beginning of the filename.

This section showcases the differences between the original release of the game, and the Internet Ranking Version, released roughly two months later.