Two unused song slots can be found in the game's data, despite being referenced within the GAME.DAT filesystem. They both take in consideration the folder data\mdb.

The first unused song is located in the folder beat, and according to its graphics, belongs to the song Beats Like These (spelled as "BEATS LIKE THIS") by Unknown Project. Given that the song has a proper banner (unlike the new licenses in this game), as well as that its Single Difficult and Single Expert charts are referenced in those of the song PARANOiA Rebirth, it's likely that this song is a leftover from an early version of Dance Dance Revolution 3rdMIX.

Below is a download of the stepchart data, converted to be playable in Stepmania. As no audio data is available, a custom cut is used. The difficulty ratings are also custom.

The second unused song can be located in the folder stri, and belongs to Strictly Business by Mantronik vs EPMD, a song which had first appeared in the series' first installment, but that was axed from Dance Dance Revolution 3rdMIX PLUS.
What is notable is that it has a brand new Single Beginner chart within the stepchart data, suggesting it was planned to be part of this game's licensed song lineup. While a Double Expert chart also exists, it is a duplicate of the Double Difficult chart.

Below is a download of the stepchart data, converted to be playable in Stepmania. Due to rising copyright concerns, audio is not included. The difficulty ratings are taken from Dance Dance Revolution 3rdMIX.

Title and grid graphics for the 2ndMIX and Step Step Revolution modes.

Due to the difficulty selection now being displayed after the song selection, the top half of muob_25.cmt is almost completely unused. 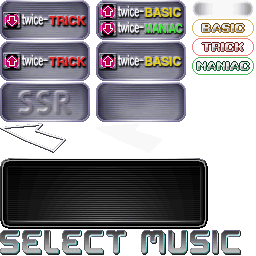 The folders in data\lang, which contains graphics meant for the game's different language settings, also contain graphics that relate to the memory card settings the original Dance Dance Revolution 3rdMIX had.

The 4thMIX leftovers on this game are scarce, mostly consisting of song graphics made prior to the creation of a new songlist, and background animations identical to final. However, there are also several graphics that predate the final game. Note that these files are unreferenced, and can only be extracted via brute-force.

Based on these graphics, it seems the song Let the beat hit em! (BM IIDX version) was planned to appear in Dance Dance Revolution 4thMIX. However, the idea was canned, leaving only the original mix of the song to debut in a non-Solo Arcade DDR title. 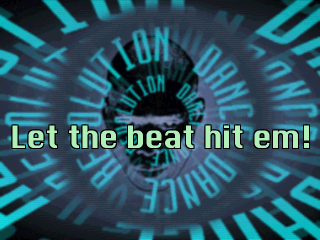 An early background for the song PARANOIA EVOLUTION also exists. Much like the song's background in the Solo series, it borrows heavily from the background of the original PARANOiA. Curiously, this early variant was also seen in a trailer for Dance Dance Revolution Solo 2000's soundtrack album.