Three banners, leftovers from an early version of Dance Dance Revolution Solo Bass Mix, can be found in the game's data.

A placeholder banner and CD. The text reads "Under construction".

Data for an unused song, CAN'T TAKE MY EYES OFF YOU (70's Remix), by BEAT BOX, can be found in the game's files, including graphics and lyrics, the latter found in GAME.DAT starting from offset 0x590989. Line breaks were added for readability. 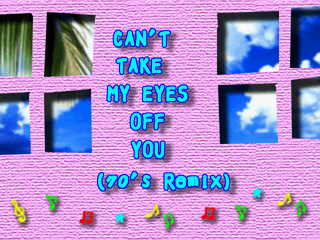 Below is a transcript of the charts, which are playable with Stepmania, with a recreation of the audio data as there is none on the disc. Note that there are no proper difficulty ratings in any of the charts.

The songlist was slightly altered between the four versions of the game.