From The Cutting Room Floor
(Redirected from Pokemon Emerald)
Jump to navigation Jump to search
This page contains changes which are not marked for translation.

Pokémon Emerald is an updated version of Pokémon Ruby and Sapphire. It pits the player against Team Aqua and Team Magma, adds a new Deoxys form, and introduces the Battle Frontier. 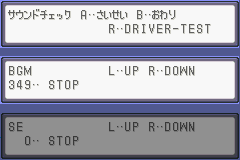 Japanese Emerald has Sound Check like Ruby, Sapphire, FireRed, and LeafGreen, and akin to the latter, it was removed in localizations.

The changes to the "stereo" entry in the Driver Test made in FireRed and LeafGreen were carried over to Emerald.

In addition to the unused music in Ruby and Sapphire, Emerald also contains the entire soundtrack from FireRed and LeafGreen, although only a few music tracks from that particular soundtrack are used in Emerald.

In the sound test, the tracks from FireRed and LeafGreen are prefixed with the letters "RG". MUS-KAIHUKU remains unused; it is now labeled MUS-RG-KAIHUKU, and its new ID is 01ED.

The maps from the Pokémon Festa 2002 demo of Ruby and Sapphire are still in Emerald, but their event data has been deleted.

The Magma Hideout maps used in Ruby and unused in Sapphire are also unused in Emerald, as well as the Contest Hall, Seafloor Cavern, Cave of Origin, and the unused Lilycove City Poké Mart maps from Ruby and Sapphire. The unused duplicate landmark names for Meteor Falls, Fiery Path, and Jagged Pass also remain.

The landmark name for the version-based evil team hideout from Ruby and Sapphire is now unused; Pokémon caught in the old Magma Hideout or Aqua Hideout preserve their caught location, but it is rendered as HIDEOUT (Japanese: アジト Hideout) like in Ruby and Sapphire.

The quirky landmark C4 from FireRed and LeafGreen is now unused and was renamed to SPECIAL AREA (Japanese: あかみどりとくしゅ Red & Green Special).

Navel Rock and Birth Island have their own landmarks for Emerald as IDs D3 and C8, respectively, whereas the original IDs from FireRed and LeafGreen are AE and BB. This distinction may be important as there is no known distribution of the Aurora Ticket for Japanese Emerald, meaning that Deoxys caught in Emerald's Birth Island could be treated as illegitimate if their language byte is set to Japanese.

Emerald added an optional rival fight in Rustboro City. In the released game, you cannot walk out the city without triggering a cutscene with the rival that registers the rival in your PokeNav and prompts for a fight. You can get around this line of triggers only by teleporting back to Petalburg by never using the Pokémon Center in Rustboro and then using Teleport or by blacking out; in which case you never run into your rival. Perhaps because of this potential situation, there is another trigger in front of the doorway into Mr. Briney's house, and this will trigger a different cutscene with the rival (where the rival exits Mr. Briney's house) which also registers the rival and offers the same battle as the Rustboro cutscene. However, due to a programming oversight, the trigger in front of Mr. Briney's house is never activated, so this cutscene is left unused in the map scripts.

Because the only way to obtain it legitimately was through distributions, none of which allowed for a Shiny, the Shiny version of Celebi was left unobtainable through normal means. It can still be seen when a Shiny Ditto or Mew Transforms into Celebi, however.

The unused weather types from Ruby and Sapphire remain so in Emerald.

Some Pokémon, when found in the wild, have a chance of holding an item. This held item data also exists for some Pokémon which cannot be caught in the wild in the final game, however, rendering these assignments unused.

As with FireRed and LeafGreen, Mareep, Aipom, Pineco, Shuckle, Teddiursa, Houndour, Stantler, and Smeargle were also meant to replace the Zubat found in Altering Cave after using Mystery Gift.

The event distribution was probably scrapped because these Pokémon can be obtained from Pokémon Colosseum and Pokémon XD: Gale of Darkness. They are also found in Emerald on the extended area of the Safari Zone (except Smeargle, which is found in Artisan Cave instead).

Multiple cases of miscellaneous development text are present in the ROM.

Similarly to Japanese FireRed and LeafGreen, Japanese Emerald contains e-Reader support and its Mystery Gift system uses it in addition to the Game Boy Advance Wireless Adapter, specifically for the Pokémon Battle Card e+ Emerald set that changes the NPC Trainers encountered in Trainer Hill. When in Wireless Adapter mode, its Japanese name is ふしぎなおくりもの (focus on the giver), while in e-Reader mode, its Japanese name is ふしぎなもらいもの (focus on the receiver); both names are translated as Mystery Gift in English.

Like Ruby and Sapphire, Japanese Emerald also supports the Mystery Event system (ふしぎなできごと), which requires the e-Reader. It was used for the Eon Ticket distribution between December 9, 2006 and January 5, 2007 for Ruby, Sapphire, and Emerald in Japan.

Overseas, Emerald only supports the Wireless Adapter mode of the Mystery Gift system from FireRed and LeafGreen, although it still contains code for Mystery Event and the e-Reader mode of Mystery Gift.

Japanese Emerald has a minor audio oversight where the moving Vigoroth incorrectly use Machoke's cry, which was fixed in western releases of Emerald. These Pokémon were changed from Machoke in Ruby and Sapphire, where they play their correct cry.

The Old Sea Map is an event item that allows the player to board the S.S. Tidal from Lilycove City to access Faraway Island and subsequently catch Mew. However, as it was only distributed in Japan during Pokémon Festa 2005, the item is unobtainable in western versions of Emerald, thus rendering the associated content unused.

There is an NPC in Sootopolis City who would host battles using Mystery Gift, leaving only the NPC and the stairs blocked by trees.

In the international versions, the layout of Trick House Puzzle Room 4 was altered to make two passageways wider. The first boulder was also removed; in the Japanese version, it's a beginner's trap since the player can block the narrow passageway if they push the boulder to the right.

Despite the change, it's still possible for the player to get trapped in the Trick House in both the Japanese and international versions.

(Source: luckytyphlosion (theory re: becoming trapped), ChickasaurusGL (video of boulder reset detail), Altfalcon (How to trap the player in all versions)) 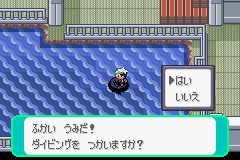 In Japanese Emerald, due to a bug, it is possible to Dive in the deep water tiles found on Aqua Hideout B2F after saving and rebooting the game. Because the water is not programmed to lead anywhere, the game throws the player back to warp 0 in entry 0 of map group 0, which is Petalburg City.

This was fixed in western versions of Emerald by not allowing the player to Dive in any circumstances.

This does not happen in Pokémon Ruby and Sapphire, as the entrance to the Magma/Aqua Hideout (game-dependent) is blocked after obtaining the Mind Badge, which is required to use Dive outside of battle.

In Emerald, players can unlock custom wallpapers by giving special codes to Walda's father in Rustboro City. In the international versions, the ribbon background and the cross, bolt, and Plusle symbols were removed.